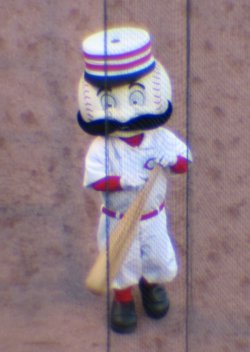 The CTS and I turned on the iRiver in the seventh innning of the game Saturday to talk about the highlights of the game, the view from the nosebleed seats, and the wave that was going on around us.We also did a little play-by-play, which was super-fun. The CTS is working on a way to let us talk about a couple games live, which I’m definitely looking forward to. Hopefully this preview doesn’t make you dread it.

C. Trent has the line-ups:

Junior is available to pinch-hit today. Jerry said he could have started, but with an off day yesterday, it's just as well to give him the two days off in a row

which doesn't make sense to me. All I can figure is he meant the off game TOMORROW (not yesterday) and that he'll make it FOUR days off in a row (not two). 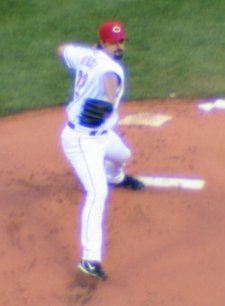 The Reds were unable to take advantage of a good start by Eric Milton yesterday when they fell to the Phillies 4-1.

I think that pretty much everyone expected the Reds to win this game. The fact is that we don't have faith in Milton. He was crummy in 2005, he was barely adequate in 2006, and he stunk up the joint in spring training. He's had weak legs, poor rubber position, and just plain old suckiness.

But this season, Milton has not been bad. Not dominating, but not bad. Last night was another example of those; he gave up three runs (two earned) on six hits through six innings. Even if all three of those runs had been earned, it would have been a quality start. He's rocking a 4.32 ERA and a 0-3 record.

But even if the error had not happened to allow that extra run, the offense wouldn't have been 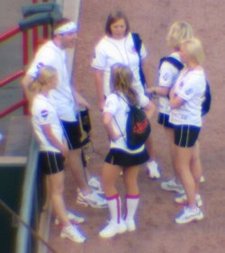 enough. Milton would have had to have been perfect, and so would have the bullpen. And that's simply asking too much. The rest of the pitcher to see time on the mound included Victor Santos, who gave up a solo shot on two hits in two innings, and Kirk Saarloos, who pitched a scoreless ninth.

Meanwhile, the Reds were sucking at the plate. Not that they never got anything going, but they couldn't string together enough things to ever cross the plate. They struck out 15 times. Only Edwin Encarnación had more than one hit: 2-for-4 on the night. Only Jeff Conine had an RBI on a solo shot in the second. On the positive side, the Conine home run did win a woman at GABP pizza for a year from the Snappy Tomato, so you've got to like that. David Ross grounded in a 5-4-3 triple play. Not just a triple play, but a routine-looking triple play. It was as if someone had asked Ross to define the triple play for a textbook, and that's what he came up with.

The loss brings the Reds record to 9-9 and drops them to third in the NLC. They try to win the series from the Phillies today at 1:15 p.m. Matt Belisle goes up against Freddy Garcia.

Posted in Game Wrap.
Comments Off on Game 18: Phillies 4, Reds 1

Reality Check for the Manager

While walking out of the stadium last night, the Crack Technical Staff and I were discussing what's wrong with the Reds. Sure, the offense can't finish the job, and neither can the bullpen, but poor in-game management choices are the overeager fingernail that can't stop picking the infected pimples on the face of the team.

But clearly manager Jerry Narron is doing many things right, and though I wasn't super-psyched that they extended his contract so early, I'm not calling for his head either. What I'd like to see is for Narron to recognize his own weaknesses and call on his staff to fill in the blanks.

That being said, these are three areas where I think that Narron should start looking to his team of experts for advice.

The David Ross Experiment is a Failure
The idea of continuing to send a struggling hitter up to the plate when there are stronger options available is iffy in my opinion, but considering the year that Ross had in 2006, I can understand why you'd give him the chance to work it out.

But this has gone on long enough. Ross has had the opportunity to find his swing on his own, and he hasn't done it. Continuing to do the same thing and expecting something different to happen is madness. It's time to give him a stint on the DL, in Louisville, or just a couple days off. Narron might consider talking to his hitting coach or general manager about the options.

All We Are Saying Is Give the Pitcher a Chance
The starter is doing well, but he could implode at any minute. Mike Stanton took that lefty to school, but the next batter's a righty. David Weathers got through the eighth; can he handle the ninth?

It seems like the “roles” in the bullpen have gotten too much emphasis. The effort to get work for everyone has resulted in everyone pitching to one or two batter in every game. There are clearly a lot of decisions being made, but no one can divine the reasoning behind them. Narron might consider talking to the pitching coach about in-game pitching decisions.

Stop Saving Javy; Leave Castro on the Bench
Choosing the right pinch-hitter isn't an exact science, and there's a lot to consider: the match-ups, the innings left, and who the heck is going to catch. But when you leave Javier Valentín--one of the league's best pinch hitters--on the bench to send up Juan Castro, you've messed up. When you do it in multiple games, it's time to get help. Narron might consider discussing how to use the bench with with the bench coach. Or, in the case of Castro, any random Reds fan in the stands.

Posted in Random Ramblings.
Comments Off on Reality Check for the Manager