Aroldis Chapman and the Louisville Bats came to Indianapolis tonight to face the Indians. There were definitely more Cincinnati Reds fans in attendance than when I last visited on Monday.

Chapman was effectively wild. His raw talent was amazing, routinely hitting the high 90s on the scoreboard pitch speed. His change-up was in the low 80s. That’s a nice speed differential. However, he allowed 3 hits and walked 5 over 5 1/3 innings. That only amounted to 1 run, and the win, thanks to a strong Louisville Bats offense, but I hope he has the time to improve in the minors. I’d hate for him to be called up early and destroyed by the maelstrom that is the Reds.

Wilkin Castillo and Juan Francisco led the Bats offensive charge, both clubbing home runs and driving in 2. Thanks to the Bats’ bullpen, that lead held up, and Chapman received his first professional win.

Aroldis Chapman was the primary reason we made the trip. Below are a few pictures of him in action. 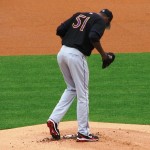 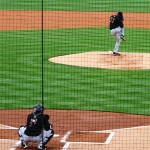 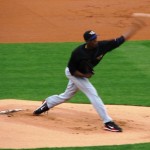 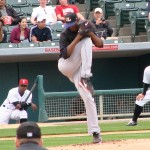 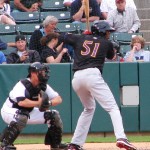