What with the Zeldink jumping in to help with the posting while I complete my MBA (which will be done before the season is, btw) and the general lack of stuff to talk about lately, I find that’s I’m quite rusty when it comes to writing original content. So, this morning, I’m recording the conglomeration of baseball-related musings that have wandered through my mind in the last 24 hours, to shake off some of the dust, if for no other reason. 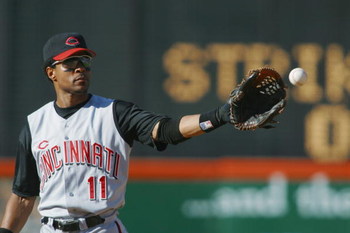 So here goes. I wonder when the Reds will have a team captain again. When I began following the team in 2000, Barry Larkin was in full effect, but I didn’t have any basis for comparison to recognize what made him exceptional. For all I knew, all teams had captains all the time. Hell, maybe more than one at a time. What did I know?

It probably won’t be too soon, though. John Fay reported (and this is probably what got me thinking of the topic in the first place) that Bronson Arroyo is the most tenured guy on the team, followed closely by Brandon Phillips. Both of whom certainly do their part, but still don’t exactly fit that leader-y mold. And when your most tenured player has only been around since 2006, that’s not exactly legacy, you know?

But that’s OK. This has been a period of change for the team, and it’s been a much needed one. It’s only been since last year that an objective observer would call the team “good.”

Of course, that’s largely due to one dude, who may in fact be the most likely captain candidate. Joey Votto has a lot of the qualities, but he isn’t ready yet. It’s still unclear whether he’s going to take the Star path and develop himself to his greatest potential or the Leader path and expand his focus to the people around him. Plus, there’s the whole issue of him not being willing to commit to the team for the long-haul. No one wants a captain who bails in his first free agent year.

One thing I find surprising (and a little scary, for reasons that will become apparent in a moment) about Votto is that he’s not particularly young for his breakout performance. Maybe that’s because the big league team ignored his obvious talent and didn’t bring him up early enough, but it seems to me that it’s because his accomplishments are due not to phenomenal inborn talent, but to mega-intense focus and determination.

That kind of force of will applied to the leadership of the team could be something stunning to see, if he goes that way. It seems more likely at this point that that force of will will be turned back in on himself, forging his mettle in the fires of resoluteness and skirting the border of narcissism.

But surely I’m getting a little melodramatic for a Saturday morning. This kind of conversation is more suited for the wee hours of the night, debating the nature of the universe over glasses of Red wine. Maybe that’s what I’ll do tonight.

Posted in Random Ramblings.
Comments Off on Saturday Morning Thoughts