With no massage appointment to be late for, the speed was down today for our training run. 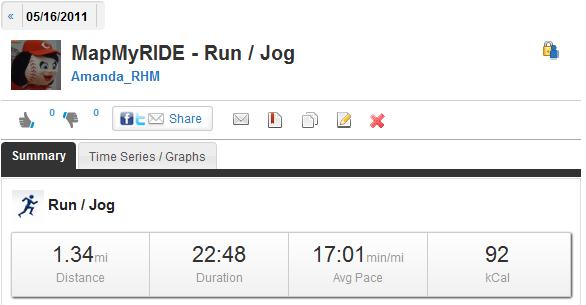 I was comfortable with 90 straight seconds of running today, so it might be time to notch up the speed. It would be nice to get the min/mile number into a range that’s considered faster than “strolling.”

Part of the fun of the Blog Jog is that blog fans are encouraged to dress up in wacky costumes or equally wacky blog-specific regalia. We’re working on a design especially for this event that we’ll be unveiling later, but we always have this classic design, available for the Blog Jog, Father’s Day, the All-Star Game or whatever special day is in your plans.

If you’d like to show off your RHM gear at the Blog Jog, log on to http://reds.com/5k to sign up for the Redlegs Run, then email [email protected] to RSVP to the Blog Jog proper. You have to pay to be in the run, but you don’t have to pay any extra to hang around with the bloggers.

The Daily Brief: Ain’t that a Kick in the Head

Last Game
The Cincinnati Reds completed their sweep of the St. Louis Cardinals yesterday. The series was entertaining every night and especially enjoyable for Reds fans, thanks to the great performances by players the Cardinals have come to hate: Johnny Cueto and Brandon Phillips. Cueto dominated in the second game of the series, going longer than any Reds starter this year in his win. And Phillips was on fire, going 5-10 with a home run and 6 RBI. The sweep would not have happened without those two.

Next Game
The Reds face another division opponent when the Chicago Cubs come to town tonight. Homer Bailey will start for Cincinnati while Matt Garza has the honors for Chicago. Game-time is 7:10pm EDT, and the game is televised on Fox Sports Ohio.

Gomes had little to say about the new look.

Just a coincidence? Or just time for a haircut?

“You could argue that,” Gomes said.

Gomes started off the season well, but has been wretched lately. He’s had just 5 hits this month and hasn’t had a home run since April 17. We’ll see if his reverse-Samson works.

What to Say to Sound Smart at the Water Cooler
The Reds’ sweep of the Cardinals in Cincinnati was the first time such a thing had been done since September 11-13, 2007.

Posted in Chicago Cubs, Cincinnati Reds, Game Wrap, NL Central, St. Louis Cardinals.
Comments Off on The Daily Brief: Ain’t that a Kick in the Head