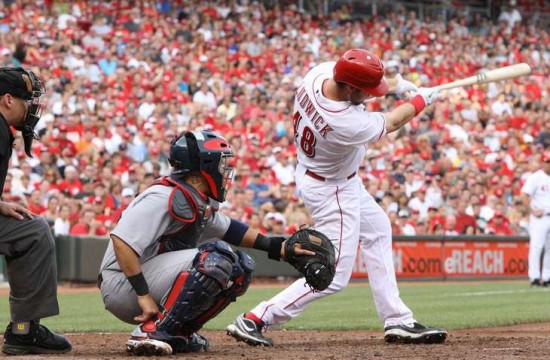 Ryan Ludwick wins the battle against Victor Marte and the Cardinals to give the Reds the series win.

The Cincinnati Reds finally won a 1-run game, and they did it in dramatic, walk-off fashion, thanks to left-fielder Ryan Ludwick and his just-barely home run in the bottom of the 10th inning.

The journey to that exciting ending was entertaining, too. Mike Leake started and did very well, shutting out the Cardinals for the first six innings of the game. The offense had given the team the lead, too, with Jay Bruce doubling in Brandon Phillips in the 5th inning to plate the first run. Then in the next inning, Scott Rolen singled to start the inning, moved to third thanks to a single from Devin Mesoraco and a sacrifice by Mike Leake, and then scored on a sacrifice fly by Zack Cozart.

When Leake went back out for the 7th, though he was suddenly not as effective. He was unable to retire anyone, giving up a solo home run to Yadier Molina and a couple other hits. Sean Marshall relieved him, but couldn’t keep the Cardinals from tying the game thanks to a safety-squeeze bunt from Rafael Furcal. Leake’s final line: 6 innings, 7 hits, 2 runs, 1 walk, and 3 strikeouts. His 5th straight quality start.

From then on, the bullpen pitched scoreless baseball. Lodan Ondrusek, Bill Bray, Aroldis Chapman, and Sam LeCure combined for 3 shutout innings, sending the game to extras and giving the offense enough time to come back. Ludwick provided that with a solo home run on the 9th pitch of his at-bat against Victor Marte to lead off the 10th inning.

The win returns the Reds to 11 games over .500 and keeps them tied for first place with the Pittsburgh Pirates, who beat the Milwaukee Brewers yesterday.

Today, the Reds will be nationally televised again, as a part of ESPN Sunday Night Baseball. Jake Westbrook will start for the Cardinals, while the Reds will send out Homer Bailey to start in place of Johnny Cueto, who has a blister on his right finger. The Reds will be going for the sweep at 8:00pm EDT.