Last Game
The Reds pulled their spring training record down to 5-13 yesterday with a loss to the Mariners. Homer Bailey gave up 3 runs (earned) on 6 hits over 4.0 innings of work, but left the game with a sizeable lead. Seattle did their coming back on Clay Hensley who pitched the next 2.0 innings and gave up 4 runs (earned) on 3 hits and a walk. He also struck out five, for what it’s worth.

Chris Heisey, Zack Cozart, Denis Phipps, and Jason Donald had multi-hit games for the Reds. Joey Votto went 0-for-2 but still had a run scored, thanks to hitting into a fielder’s choice.

Next Game
The Reds host the Rockies tonight at 10:05 p.m. Johnny Cueto will take the mound for the Reds against Jeff Francis for the Rockies. 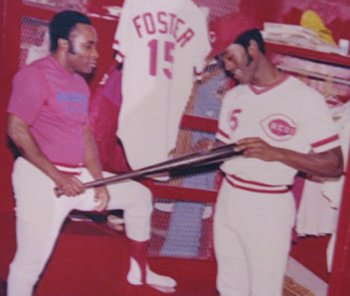 George Foster to Marshall the Opening Day Parade
Opening Day is a huge deal in Cincinnati, and every year they select a celebrity to be the grand marshal of the parade. This year they’ve selected George Foster. From the story on Cincinnati.com:

Foster is a former member of the Big Red Machine and a National League MVP (1977) who spent 11 of his 18 major league seasons with the Reds.

“I think sometimes George gets lost in the shadow of Bench, Rose and Morgan, but if you look at his stats, he was just as big a part of the Big Red Machine as anyone,” said Neil Luken, chairman of the 94th annual parade. “And to boot, he’s just a nice guy.”

April 1 will be here before you know it!

What to Say to Sound Smart at the Water Cooler
When the Reds faced the Rockies’ pitcher that they’ll be facing tonight earlier this spring, Cozart grounded into a triple play.

Posted in Random Ramblings.
Comments Off on In brief: Votto hitless in come-from-ahead loss

On occasion, I’ve made fun of Cincinnati Enquirer columnist Paul Daugherty for his terrible excuse for sports writing. So I suppose it’s only fair that I point out a time when he writes something that doesn’t suck monkey balls.

If you believe Aroldis Chapman is a starting pitcher, this ain’t for you.

If you think the way Dusty Baker thinks, read on.

I swore I wouldn’t type the words “Aroldis” and “Chapman” until he actually threw a pitch that mattered. Some horses are beaten to death once. Others are flogged enough, they need 1,000 lives. Chappy’s been flogged.

Really? Daugherty is supporting the idea of starting Chapman? That’s unexpected. What’s his reasoning? Surely, it’s something like, “Throw ball. Strike out. Win.”

Chapman had zero impact in the playoffs against the Giants last October. Your best pitcher — or at least your best arm — in the five biggest games of the year: Zero impact. That’s ridiculous.

Chapman will get far more starts than he would appearances in one-run, ninth-inning save situations.

And another one. Why is Daugherty making sense?

A stat from my pal Joe Posnanski:

During his career, Mariano Rivera converted 140 of 158 one-run save chances, in the ninth inning. That’s a conversion percentage of .886. During the 2000s, according to Baseball Prospectus, the major league average was .848.

Posnanski writes, “The average team with that lead would have been expected to hold the lead in 134 of those 158 games. With Mariano, the Yankees held the lead six more times over 16 seasons.”

Now I get it. Daugherty’s been reading some Posnanski, who, outside of his hero worship book on Joe Paterno, is one of the best sports writers out there. You could do far worse than take inspiration from and emulate him.

Before Daugherty finishes, he makes one comment about Dusty Baker that was quite insightful.

Baker wants Chapman to close because it makes his job easier.

Baker has been complaining again this week about want a decision made on whether Chapman starts. And this is probably why. Having Chapman as the close means Baker doesn’t have to think, doesn’t have to manage. But as Tom Hanks said in that great scene from A League of Their Own, “Chicken shit!”

Baseball is supposed to be hard. If it wasn’t hard, everyone would do it. The hard is what makes it great.

Having Chapman close because it makes the manager’s job easier is a terrible reason. For the reasons listed in the column and many more, moving Chapman to the starting rotation is the right move.

And then Daugherty finishes his column strong.

I’m not getting my hopes up that this is a predictor of things to come, though. I mean, even a blind squirrel gets to bust a nut once in a while. Besides, starting with a valid premise, putting together mostly coherent sentences, and backing up your statements with verifiable facts is really hard and more than we can expect on a constant basis from “journalists” like Daugherty.

Posted in Cincinnati Reds, NL Central.
Comments Off on Daugherty lends support to Chapman as starter