In brief: your tickets are good for at least 1.05 games tonight 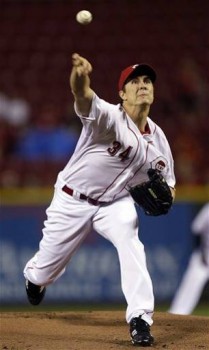 Bailey was on pace for a complete game shut-out if the other guy hadn’t been just as good. Oh, the rain was a problem, too.

Last game
Technically, last night’s game still isn’t over, so does it qualify as the “last game”?

Homer Bailey was just spectacular last night before the rain stopped the 0-0 game after the top of the ninth inning. He struck out 10 in his 8.0 innings of work and Aroldis Chapman put the team over the 11-K limit needed to get attendees a free pizza. Assuming they’re still doing that promotion this season.

What is a uessi?
I don’t like to read a lot of Reds sports reporting in the legitimate media because I find the authors of it to be either unbearably smug or entirely nonsensical. In the category of “both,” there is Paul Daugherty “respectfully” disagreeing with someone who thinks it’s great how much Joey Votto walks:

That’s not to say he won’t pick it up. I’m thinking it’s just a matter of time. Dude’s a great hitter. But the notion that how he’s hitting now is somehow terrific just misses the mark, and badly.

Votto isnt Ted Williams, who walked a lot and did everything else a No. 3 guy does. He’s not Bonds. Walking is one component of being a great hitter. uessi

Except for the people who regard walks as basepath cholesterol, I think we all can agree that walks are a universe better than outs and somewhat less thrilling than hits.

But Votto’s not swinging in a vacuum. Someone else is deciding where the pitch is going. If the ball isn’t anywhere close, he can’t hit it. So stop acting like 21 walks are all his damn fault or that they mean he’s in a damn slump because the damn pitchers are damn nibbling.

Also, what the hell does “uessi” mean? That part of the stream-of-conciousness breaks off so abruptly, I thought it might be an acronym, but the only meaning I can find for it online is that it’s apparently the Turkish word for “expontential.”

What to say to sound smart at the water cooler
Yes, if you had tickets to tonight’s game you can go to the continuation of last night’s game at 5:30. I already said that. Stop asking about it in the comments of all the Reds’ news stories and Facebook posts.

Posted in Daily Briefs.
Comments Off on In brief: your tickets are good for at least 1.05 games tonight