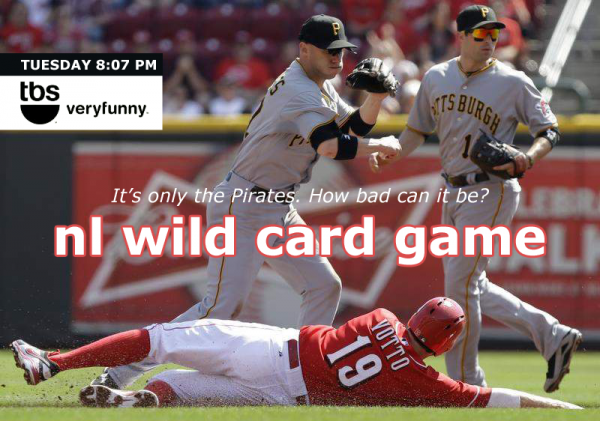 Being a Reds fan in Indianapolis, I follow both the Reds and the Indianapolis Indians, who are the AAA affiliate of the Pirates. So it’s no big surprise to see announcements from both teams about clinching playoff spots in my Facebook feed this morning.

I came across the posting about the Indians first. When I scrolled down a little further to find the one from the Reds I thought, “my, that looks familiar.”

I guess MLB must have a template for this sort of thing? But they let the Reds use their special font and they let the Pirates use their terrible hashtag. “Buctober”? That’s apparently the month that comes after “Subtember” and before “Movember.” But now what’s to become of “Rocktober”?? Heavy metal stations around the country will be left scrambling!

In fact, all of the NL postseason contenders are now set; it’s just a matter of which NLC team will win the division, take the first wildcard, and take the second wildcard. Any of them could still fill into any slot, though the Reds doing things like letting the Mets take them into extras does sort of make me just grateful for what I have.

Mr. Perfect and the last 11 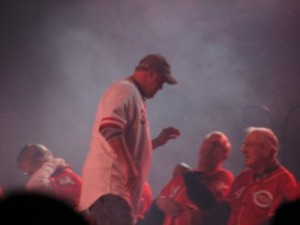 Tom Browning is a real part of Reds history, ergo all my pictures of him are from Redsfest or mugshots.

The Hardball Times had a nice piece yesterday recounting the events of the perfect game thrown by Tom Browning 25 years ago.

Now for the moment of truth, the bottom of the ninth. First up was long-time catcher Dempsey. The veteran would hit .251 on the year—not spectacular, but not a pushover. But Dempsey just flew out to right. That was 25 down, two to go.

Second baseman Steve Sax came up next. The former Rookie of the Year Award winner and three-time All-Star had never quite lived up to the hopes of his early career. Now, with a chance to ruin Browning’s hopes, Sax grounded one up the middle, but Barry Larkin fielded it cleanly for the 6-3 ground out.

I’ll leave the excitement of the last batter (and the story of the rest of the game) for you to go read over there. What a thrill that must have been.

Even so, as we’re acutely aware right now, even a perfect game is just a single win in the season record. With just 11 games left to play, the Reds are 2.5 games back on the Pirates and Cardinals. I think a lot of us are hoping they’ll swoop in and make a run for the division, but even with half of their remaining games against poor teams, I just can’t quite make myself believe it. The way our boys have played against crummy teams lately, I wouldn’t be surprised if they lost the series to the Mets.

I’ve focused a lot on the NLC with all the jockeying for position that’s been going on there, but there are other contenders that could make a challenge for the second wildcard spot as well. At 8 games back with 13 games to go, the Diamondbacks have entered It Would Take a Miracle territory, but the Nationals are a little closer. Just 5.0 games back, they wouldn’t need a miracle exactly, just some serious Wheels Falling Off from the Reds.

If you’re going to talk about late-season wheels falling off, though, you simply must mention the Pirates thanks to their late-season performances the last few years. What if the Reds surprise everyone (most of all: Dusty Baker) and find some intensity for the remaining games. With 6 of the 11 against the Pirates, the Reds could do some serious damage to the standings as we currently see them.

The winning, yes, I want. The pushing of the Buccos out of the postseason, not so much. I kind of like the Pirates. Besides, I might puke if ESPN turned out to have correctly predicted a Nationals-Tigers World Series.

Posted in Random Ramblings.
Comments Off on Mr. Perfect and the last 11

With 23 games to go in the regular season, the Reds are 3.5 games back on the NLC and lead the second wildcard spot by 7.5 over the Nationals. It’s not exactly sewn up yet, but it’s felt pretty likely that our boys will be in the post-season for a while now. The real question has been: then what?

The first wildcard spot has belonged to the Cardinals for as long as the Reds have had the second one. The two wildcards have to play each other for the right to proceed, and for a while there it was seeming like the Cardinals were just unbeatable.

Which is just annoying. The Cardinals shouldn’t be that hard to beat. When the hell is Molina going to retire??

Lo and behold, the Reds have won their last three games against the Cardinals and have properly smacked around their ace twice. Pop quiz: if you’re managing the Cards in that one-game series against the Reds, do you start Adam Wainwright? The dude is 15-9 with a 3.14 ERA, but he’s given up 15 earned runs in his last two starts, both against Cincinnati. That stuff can get into a guy’s head.

The baseball season is too long to throw in the towel too early, even if it does look like it will be an early post-season exit, so I’m choosing to hope that this modest 2-game winning streak could be the start of something big.

I’ll close today with the latest offering from the Cincinnati Reds Wooo Guy, who hasn’t even given up on Pete Rose yet, he sure as heck won’t have lost hope for this team.

Posted in Random Ramblings.
Comments Off on 23 games to go; it’s time to get hot