Spring Training has begun, and the Reds have been busy.

For starters, Edwin Encarnacion avoided arbitration hours before his hearing by signing a 2-year deal worth $7.6 million. Personally, I’m a little surprised that the Reds are investing any money in offense. Their track record this off season has been anything but good in that regard.

In other news, the key player in the Adam Dunn trade, Micah Owings, seems to be ready to pitch this year. He was basically damaged goods last year when the Reds received him. Unlike the nefarious Gary Majewski, the Reds knew about this injury beforehand. Hopefully, he’ll rebound. However, even if he can’t pitch, there’s plenty of gaping holes in the Reds offense to find use for Owings’ impressive bat.

And lastly, the great vanishing shortstop Alex Gonzalez has actually spent time on the ballfield this year. Obviously, it can’t last long. For whatever reason, Gonzalez has seriously pissed off the great karmic powers of the universe. Should he last long enough to get a Reds bobblehead, they should have him seated on a horse with one leg in the air. 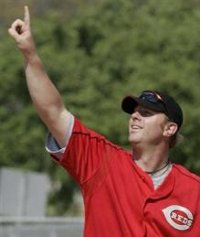 Adam Dunn signed with the Nationals this week, fulfilling Jim Bowden’s ages-old dream of rebuilding the killer outfield he’d engineered back in Cincinnati in 2004-2005, minus one pesky injury-prone kid.
That’s right, at some point next season, you can expect to see Adam Dunn, Wily Mo Peña, and Austin Kearns all patrolling the Nationals’ outfield grass.

Reds fans nostalgic for the greener, non-Dusty Baker days of 4 to 5 years will have to wait until the middle of August for Washington to visit Cincinnati. I have a feeling that neither team will be in contention by then.

Jane Heller, a life-long Yankees fan, has defined much of herself and her career by her baseball. In the latest edition of the Women in Baseball series, Heller talks about her new book Confessions of a She-Fan.

Posted in Random Ramblings.
Comments Off on Women in Baseball: Jane Heller

No one in my family smoked or did anything with tobacco, so any resemblance to chewing tobacco was lost on me as a child. However, the gum was always one of my favorite purchases from the little league concession stand. That and Lik-M-Aid.

This Calls for the Bouncing Javy Head

Woo-hoo! Though we still don’t know where Griffey and Dunn are going to land, you can rest assured that there will be hot Latin Love Machine baseball action in the upcoming season. Javier Valentín has signed with the Washington Nationals.

Well, not rest assured; it’s a non-guaranteed minor league deal. From the story on the Nats site:

The Nationals agreed to non-guaranteed Minor League contracts with catcher Javier Valentin and shortstop Alex Cintron on Tuesday. Both will get invitations to Spring Training.

Valentin, a 33-year-old switch-hitter, appeared in 94 games for the Reds last season, batting .256 with four home runs and 18 RBIs. Throughout his 10-year Major League career, Valentin — a former third-round Draft pick of the Twins in 1993 — is a career .251 hitter.

The CTS looked it up: those 94 games yielded 129 ABs. Freaking Paul Bako squeezed 299 ABs out of 99 games and contributed .217 AVG, 6 HR, and 35 RBI. Plus, you can’t forget the differences in ‘stache-related intangibles.

Posted in Random Ramblings.
Comments Off on This Calls for the Bouncing Javy Head