That without Mark McGwire, and then Albert Pujols, no one would think he was all that? Dave Duncan is the real managing might on this team. I’d like to see what he could do with the Reds pitching staff.

The Cardinals are 12.5 games back?? Will they never learn to do a proper late-series collapse? You’d think they’d know, watching the Cubs as much as they have.

For Sale: Overt Antagonism for the Cubs 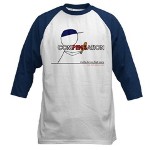 The Red Hot Store now features a brand new t-shirt design. This one lacks the wit and subtlety you’ve come to expect from Red Hot Mama in favor of a little straight up player hatin’ on the Cubs.

They’re in first, after all. It’s only natural to spew a little jealous vitriole. Plus, I’m happy to finally be doing my part for all the people who hit the site on searches for “Cubs suck t-shirts.”

Just back from watching the 7-8 year old “Reds” play, and I see that the Cardinals aren’t even beating the grown-up Reds yet.

And Arroyo’s even going!