The MLB Network has lured broadcaster Bob Costas away from HBO. I won’t be impressed until they get Bryant Gumbel. I need somebody to remind be to be on the lookout for the two-minute warning.

Posted in Random Ramblings.
Comments Off on MLB Network Steals Costas from HBO

Because I know that pictures of Reds mascots are what you come here for, here are a couple of Mr. Redlegs at the Sports Museum of America. 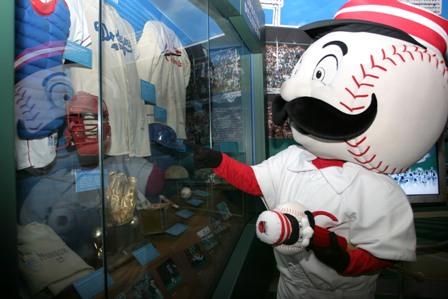 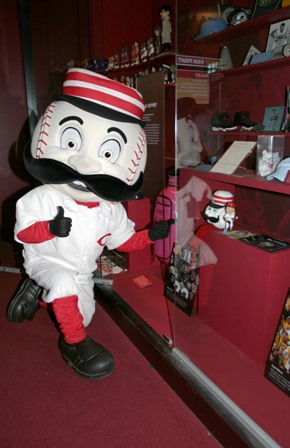 NEW YORK, NY — On January 26, Mr. Redlegs, the official mascot of the Cincinnati Reds, stopped by the Sports Museum of America, the nation’s first and only fully interactive all-sports museum, to donate a Cincinnati Reds golf club head cover and Cincinnati Red Tom Browning, aka “Mr. Perfect,” bobblehead to the Museum’s Fan Culture Gallery. Browning earned the name Mr. Perfect after pitching a perfect game on September 16, 1988 — a 1-0 win over the Dodgers.

Each year the good people at Lovemyteam.com give their Fan Friendly Seal of Approval to five baseball players. This award recognizes particular generosity, accessibility, and general niceness.

Jeff Francoeur
With Tim Hudson winning our award last year, it seems Braves fans are quick to tell us when someone is doing a good job. But the truth is Jeff Francoeur does a great job of making sure every fan has a chance to get something signed. One fan noted “Every time we are there, we see Jeff Francoeur signing tons of autographs and chatting with fans, young and old alike.” Thanks, Jeff, for remembering we are an important part of the game!

Jason Giambi
Jason Giambi may not seem like the MLB poster-child for role models, with his apology for his involvement with steroids. But fans in New York appreciated the way he regularly signed autographs after the game, even in the rain. Some fans even noted that Giambi was the only player who would sign autographs for the kids in his home park. So as he moves back to Oakland, we want to thank Jason for his service to the fans of New York City. Thanks Jason!

Lyle Overbay
Since Lyle played the last few years in Toronto, fewer fans have gotten to experience how generous he is with his time. But many folks shared stories of how approachable Lyle was while working with kids at a batting camp, or at charity events within the community. We may not always have opportunities to interact with players, but fans appreciate when a player takes the time to make their kids feel special. Thanks, Lyle, for all that you do!

Vance Wilson
Vance earned the Fan Friendly Award back in 2006. This year, in praise of Vance, one fan wrote “Vance spent all of 2007 on the DL, and started there in 2008, but he has stayed SO involved as a true ambassador for the Tigers. He is often stationed at the wall and takes as much time as is necessary to make sure each kid has a positive, personal experience.” Clearly, Vance understands that fans really just want that personal connection. In 2009, Royals fans will get to see why Vance is the 2009 Fan Friendly Award winner.

David Wright
This is the third year in a row that David has won the Fan Friendly Award. David also won the Joan Payson Award, given out by the NY chapter of the Baseball Writers for his service to the community. At that ceremony, he noted what an honor it was to be in a position to use his name to help others. The David Wright Foundation isn’t the only way David touches the lives of fans. Mets fans see it in everything he does. Thanks David, and keep it up!

Visit Lovemyteam.com to vote for your favorite Fan Friendly player.