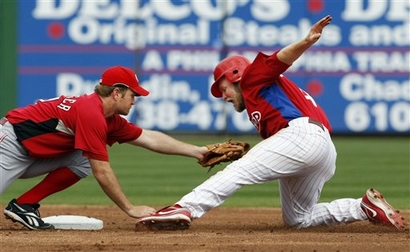 Jeff Keppinger offers a morsel to Eric Bruntlett, who was hypnotized to believe he was a falcon.
Posted in Cincinnati Reds, NL Central, Pretend Captions, Spring Training.
Comments Off on Polly Wanna Glove?

While the Reds seem to be doing fairly well in Spring Training, the Houston Astros are anything but. Currently, they have won 1 game. That’s right. One game out of 10. That’s not exactly the kind of hope that spring is eternally known for.

In positive news, Aaron Boone, who apparently is with the Astros now, had a hit recently. So there’s that.

We talk about not being spectacular — in other words, routine.

Sounds…motivational. Good luck with that, Cecil!

I was sick over the weekend, so I spent some time watching the World Baseball Classic. I’ve always thought an international tournament was a great idea, but putting it in the middle of MLB’s Spring Training seemed like an idiotic move to me. It still does, but I doubt that’s going to change anytime soon.

I caught the US vs. Canada game and was excited to see Joey Votto do so well. Heck, maybe he’ll have such a good year with the Reds that he’ll be batting cleanup by the end of the season. Of course, with Dusty Baker at the helm, that’s probably not too likely.

After the US eked out their victory, I caught portions of a Puerto Rico game. At first I thought it was a little odd. I mean, isn’t that effectively the same thing as the US fielding a second team? Of course, it does double the country’s chances of winning. And given the US’s weak performance in 2006, they might want slightly better odds.

Posted in Random Ramblings.
Comments Off on Watching The WBC