Live Chat with a Reds Guy

When I tried to get in on one of these a few years ago, it was total crap, but I’m sure the technology has improved since then. So if you’ve got any questions for a Reds front office guy you wouldn’t recognize if you were filling up at the adjacent pump to his H2, sign in early. There will probably be a line in the virtual waiting room.

Reds VP and Asst. GM Bob Miller Will Answer Your Questions on Thursday, March 26, at 11 AM ET

Extra, extra, read all about it.

Posted in Random Ramblings.
Comments Off on Live Chat with a Reds Guy

The One Year We Don’t Go To Spring Training 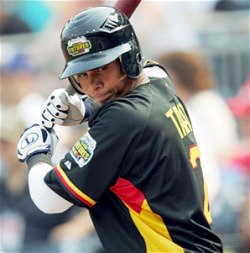 For the first time in years, the RHM family is unable to attend Spring Training, and this happens.

The Pirates acquired Jose Tabata, a top Yankees prospect, last year in the Xavier Nady trade. Apparently, during the off-season, Jose married Amaila. And Amaila has been arrested for kidnapping a 2 month-old baby. WTF?

Jose hasn’t been implicated and seems to be as surprised as everyone. Hopefully that remains the case.

My favorite part of the article is this, though.

Now, I haven’t cracked open my Kidnapper’s Bible in a few years–heck, there’s probably even a revised version by now–but that doesn’t seem like the best way to get away with a kidnapping. Maybe she was waiting for the kidnapper’s getaway bus.

Posted in NL Central, Pittsburgh Pirates.
Comments Off on The One Year We Don’t Go To Spring Training

In somewhat of a surprise, the Reds included power bat Daryle Ward in their latest round of cuts. This is actually a good thing, as Ward had been absolutely terrible with the Cubs the last couple of years, and the Reds already have plenty of terrible Cubs screwing up their team.

The cut of Ward and 5 others gets the roster down to 36 players. Just 9 more to go before Opening Day. John Fay runs down who he thinks is in and where the decisions lie.

Shockingly, Fay thinks only 2 catchers will make the team. Surely the apocalypse isn’t far behind.