Kearns Looks Ahead in the Cincinnati Enquirer
Biography and Career Highlights on Reds.com

Posted in Austin Kearns.
Comments Off on References

Austin Ryan Kearns was born May 20, 1980 in Lexington, KY. He graduated from Lafayette High School in Lexington, KY in 1998. In 1997, he was a member of the USA’s National Junior Team and hit .478 with 5 home runs and 14 RBI. He was offered a baseball scholarship to the University of Florida but instead signed with the Reds.

He lives in Lexington with his wife Abby (whom he married in January 2006) and son Aubrey Ryan (who was born September 2005). The general public did not know that Kearns was expecting, so when he disappeared in the middle of September to attend to a “personal matter,” people were concerned. In fact, it turned out to be happy news, so long as you weren’t hoping to be the one delivering said baby.

Besides his still-high expectations and his impressive defense in right field, Kearns is probably best known for his ears. They stick out rather goofily, which just makes him all the more endearing. “Fear the Ears” was an apt catchphrase for Kearnsy.

Kearns is a looker. He came into spring training in 2005 with the most beautiful hair that Dave Miley soon made him cut and it’s never been back. He’s got the curls trimmed down to show off the ears this year, though, so it’s probably a net gain.

Kearns is bestest buddies with Adam Dunn. I’ve already talked about that at some length in Dunn’s human league profile, but it’s also been well documented in plenty of fake news, such as:

Posted in Austin Kearns.
Comments Off on Non-Baseball Stuff 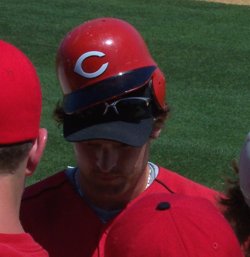