Looks like there might be a good reason that LHP Bill Bray has been less-than-awesome so far this season, and it’s not that lingering curse from having been part of The Trade. The Reds have just put Bray on the 15-day DL retroactive to last Thursday with a left groin strain that’s been bugging him since spring training.

To take his place, the team has called up J.J. Hoover from AAA Louisville. With the Bats, young Hoover is throwing up a 2.00 ERA and 17 Ks over 9 IP. It’ll be Hoover’s first appearance in the majors, whenever Dusty Baker gets around to using him. If it takes as long for Hoover to get into a game as it took Frazier when he finally came up, we’ll see Hoover sometime this weekend. 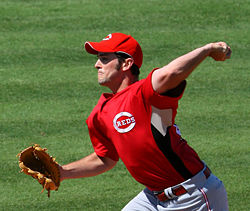 Bill Bray is the latest arbitration-eligible Red to sign a contract with a team without the dreaded hearings. Bray signed a one-year contract for $645,000.

Bray may be best known for how he came to the Reds, as a piece of the infamous Trade that general manager Wayne Krivsky pulled in 2006. All the other players received have long since departed, leaving Bray with the dubious distinction as the last man standing.

Numbers were to be exchanged today, so it’s likely we’ll be hearing how far apart the players and the teams are soon.

I understand that Bill Bray is getting married tomorrow (December 2, 2006). Congratulations to the most promising part of The Trade. May consistency in his home life bring consistency on the pitching mound.

Posted in Bill Bray.
Comments Off on Congratulations, Bill Bray