What a Difference a Year Makes

When I first wrote Lopez’s human league entry last year, I was on the fence about him. He was a cup of potential with a dash of insolence. Since then, he’s added a tablespoon of unselfishness, a pinch of sense of humor, and three shakes of self-assuredness to balance out the recipe and make quite the delicious dish. Quite the dishy dish at that.

Lopez was the Reds’ single representative in the All-Star game in 2005 and contributed a hit to the National League’s losing effort. It was reported that Lopez was very excited to be there with the elite in his field, collecting free stuff and autographs. His behavior hinted at a child-like sense of wonderment that I don’t think Lopez was mature enough to let show before. Had be been at an All-Star game in 2004, I suspect he would have thought himself too cool to be seen participating in the autographs trades.

Lopez was also the recipient of the Silver Slugger for shortstops in 2005, despite the fact that he wasn’t even the starter at short for the first month of the season, as Cincinnati worked its magic on his offensive abilities. The team doesn’t ever talk about moving Lopez to second base these days, he’s never the topic of trade rumors, and he’s no longer the young, unproven guy. In 2005, Lopez went from being the oft-questioned heir to the Reds’ shortstop throne to the one and only player on the 2006 roster whom you could call a sure thing.

But the thing that Lopez has done this year that has done the most to convert me to a fan is the way he’s embraced his position as a number 2 hitter. After Ryan Freel gets himself on base, Lopez shows superior self-discipline in his at-bat to give Freel the opportunities to do his magic. He takes some strikes and maybe his numbers suffer for it, but he does it for the team. And I don’t know what more you could possibly ask for from a player.

Posted in Felipe Lopez.
Comments Off on What a Difference a Year Makes

The defining physical characteristic of Felipe Lopez has got to be his vast collection of tattoos. They cover his arms, extending up past where sleeve ends and imagination begins. He’s even got one on his neck.

Lonnie Wheeler mentioned the tattoos in a column in the Cincinnati Post. He said:

His tattoos bleed together from shoulder to wrist, flowing down from the baseball painted onto his right upper arm (the left being reserved for his two daughters). “Everything’s built in around the baseball,” said the Reds’ all-star shortstop. “The dragon going underneath is supposed to protect me from any evil. Everything has to do with confidence.”

According to Batting Around interview, his first tattoo was a cross with his daughter’s name (I’m guessing that’s “Chaydin”) on it:

The cross with my daughter’s name on it. From there, it got addicting. I’ve always been into stuff like that — earrings and tattoos.

I can’t find any decent pictures of Lopez’s tattoos. Maybe it’s time to invest in a serious zoom lens and take them myself. However, if you know of any good photos, please let me know so that everyone can see. 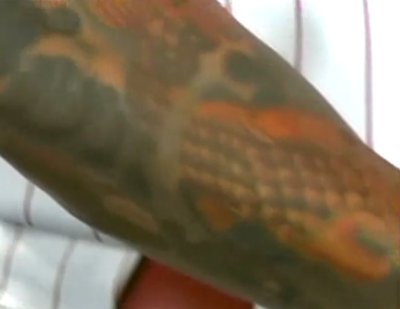 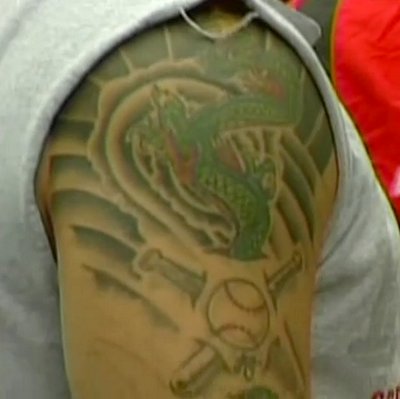 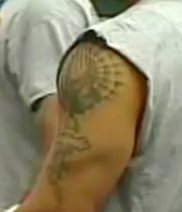 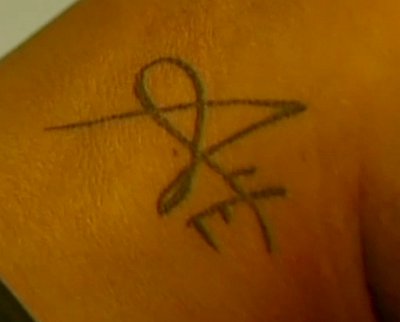 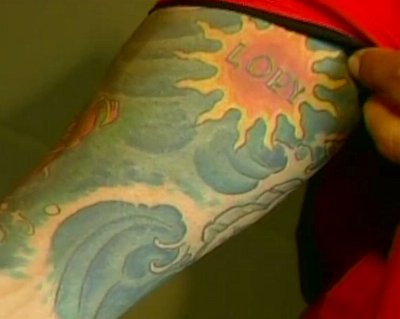 Posted in Felipe Lopez.
Comments Off on Tattoos

Special thanks to the following Web sites for providing knowledge above-and-beyond the normal stats. There are a few tiny tidbits I didn’t include from these sites, so go visit them for more information:

Posted in Felipe Lopez.
Comments Off on References

When you make the decision to wear a player’s number, you’re honoring that player, but you’re also telling the world that you identify with that player on some level. At the time of this writing, I’ve never seen a person don #2 other than Lopez himself, but I expect that to change in the coming months. If I were to see a person wearing a Lopez jersey at this point, I would assume one of two things: 1) that the person felt rebellious, under-appreciated, and particularly educated in the back-stories of the Reds’ players, or 2) that the person hated Aurilia and just wanted to make a point.

Posted in Felipe Lopez.
Comments Off on What Wearing His Number Says About You

Felipe Lopez is a talented kid who’s been jerked around his entire career, if not his entire life. According to the Slam Sports story (listed below), Lopez had an attitude and it didn’t sit well with the Jays’ fans, so they were willing to give up on him when he was just 22. I won’t fault them for that because 1) chemistry is important and if it wasn’t there, it wasn’t there, and 2) a good, solid trading can do wonders for a crappy attitude. Though it was probably a blow to his pride, the trade really also benefited Lopez, who came to a team that already contained Jose Guillen, a guy whose attitude problem so outshone any other sullenness that Lopez could easily blend in with the crowd.

I think that Larkin may have been beneficial to Lopez’s game and self-confidence, but that ultimately Larkin set Lopez up to fail. It is my opinion that Larkin was so desperate to have a say in his own legacy that he was willing to proclaim Lopez to be the imminent shortstop of the future even though Lopez really-and-truly was not ready. If I had been told by one of the greats that I was next-in-line to be great myself, I too might have displayed the overdeveloped sense of entitlement that we saw from Lopez at the beginning of this season.

Going into this season, I agreed with the decision to start Aurilia at short over Lopez. It wasn’t about Aurilia; it was about Lopez. I don’t know what the spring training statistics said, but I do know what I saw first-hand while I was there: the sneering mug of an impetuous little punk who needed a chance to grow up before he could reliably take the field full-time.

But, as life-changing attitude adjustments often do, that changed very suddenly at the beginning of May. You could see the change in a quote buried in a story in the Cincinnati Post (Reds Might See New Faces, May 5, 2005): “I’m over that stage of trying to show them what I can do, because I’m sure they know by now,” said Lopez. “Every time they give me the opportunity, I just try to do something to win.”

To me, that said a lot. It said that this incredibly capable guy who’d be pressing, struggling his whole career to grab the good things to which he felt he was entitled had finally decided to just be who he is and let good things come to him. It’s an easy lesson to talk about, but even if you’ve seen it in action, “letting good things happen” is remarkably difficult to live out.

I know I must come off as anti-Lopez sometimes, but I truly am happy to see some of those good things finally coming his way. When he drops that sneer, Lopez has a sweet, genuine smile that just warms my heart. He really can be great, and he does deserve it.

Posted in Felipe Lopez.
Comments Off on My Impressions