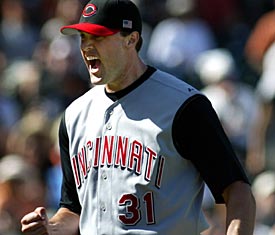 Matthew Thomas Belisle was born June 6, 1980 in Austin, Texas. He graduated from McCallum High School, where he lettered in baseball and basketball, in 1998. Back in those days, he was named Sophomore of the Year for his district in baseball and was the district’s Most Valuable Player as a junior for baseball.

Belisle is a cutie-pie and a favorite of many of the lady Reds fans.

Posted in Matt Belisle.
Comments Off on Non-Baseball Stuff

Matt Belisle is currently a relief pitcher for the Reds, but lots of people would like to see him given a chance to start, seeing as the third-through-fifth starter positions continue to be weaker-than-normal in the rotation.

Here’s stuff stolen from his bio page on Reds.com until I can get back to do this properly. At the very least, I’ll put this in bullet form so you can actually read it.

Posted in Matt Belisle.
Comments Off on Baseball Stuff