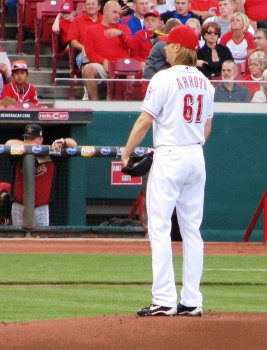 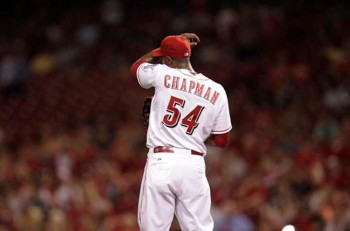 The Cincinnati Reds continued their winning ways in the first game against the Houston Astros last night, beating the bottom-dwelling team 9-3.

Mike Leake started for the Reds and turned in a quality start, going 6 innings and allowing just 2 runs on 7 hits, 2 walks, and 6 strikeouts. His good outing netted him his 7th win on the season, giving him a slight chance at joining the rest of the members of the starting rotation with at least 10 wins.

The offense took a few innings to get going against the Astros, but once they started, they didn’t stop. In the 3rd, Zack Cozart broke the scoreless tie with his 15th home run, a 2-run shot that drove in Dioner Navarro. In the 5th, Jay Bruce broke the game open with his 28th home run on the season, driving in Chris Heisey and Ryan Ludwick to make the game 6-2.

The scoring continued in the 7th inning when Brandon Phillips singled in Chris Heisey. And in the 8th, Miguel Cairo had a rare hit to drive in Scott Rolen and advance Navarro to 2nd. A couple batters later, Heisey hit a grounder that scored Navarro.

It was a game that I expected the Reds to win, even with a pitcher in Leake who has struggled at times. Really, I almost expect the Reds to sweep this series. The Astros are that bad of a team. In fact, with this win in Houston, Cincinnati now has more wins at Minute Maid Park since the All Star Break than Houston does: 4-3. That’s some ineptitude that I hope the Reds can take advantage of.

The second game of the series tonight will feature Homer Bailey going against Lucas Harrell. Harrell, who has a record of 10-9, possesses 25% of the Astros’ wins. First pitch is scheduled for 7:05 pm EDT.

After losing a series to the Pittsburgh Pirates, I wasn’t sure what to expect from the Cincinnati Reds as they opened a series with the Houston Astros yesterday. Especially with Mike Leake starting, who hasn’t been what you would call “good” this year.

Perhaps the offense was concerned, too, as they opened the top of the first inning with several strung together hits to give the Reds a 2-0 lead before Leake ever took the mound. Votto started things off with 2 outs in the first with a single. Brandon Phillips followed with a double that drove Votto home. And then Jay Bruce drove in Phillips. It’s awesome to see the heart of the lineup produce like that.

Then it was Leake’s turn to hold the lead, which he did over his 7 innings. He allowed just 1 run on 4 hits, 3 walks, and 7 strikeouts. Leake has two good starts out of his last three now, which coincide perfectly with his two wins. Hopefully, we’ll see more of the outings like yesterday and not like the one before when he couldn’t make it out of the 4th.

After Leake, the bullpen held the lead. Logan Ondrusek pitched a scoreless 8th, and Aroldis Chapman struck out the side in the 9th for his 4th save.

Thanks to the St. Louis Cardinals being no-hit by the New York Mets, the Reds now have a 2.5 game lead in first place. They’ll try to increase that even more today when Mat Latos starts against Wandy Rodriguez at 7:15pm EDT.