The Cincinnati Reds defeated the Houston Astros today 6-5, taking the weekend series. That is the Reds’ third consecutive series win and has their record back at .500 at 11-11.

Mat Latos started for the Reds and was bad again. He pitched 6 1/3 innings, allowing 5 runs from 10 hits, including 2 home runs, and struck out 4. On the season, Latos has started five games, but only one of them was good. His last start against San Francisco resulted in a shutout, but so far, all of his other starts have been a disappointment.

While I’m not too concerned about Latos–I’m confident he’s just having a slow start to the season and will improve–the bad starts do grow tiresome. Thankfully, the Reds’ offense has improved and were good enough to bail out Latos today.

Joey Votto tied the game twice with his awesomeness today. Once in the 4th inning when he hit a two-run home run–his second on the season and two more than Albert Pujols–to tie the game at 2-2. And then again in the 5th inning when he lined a double down the right field line to drive in two and tie it at 5-5.

The game stayed tied until the bottom of the 8th when Jay Bruce came to the plate and hit his fourth home run in four days. That gave the Reds the lead for the first time all day and allowed closer Sean Marshall to enter and absolve his last save failure with a 1-2-3 save.

The Reds finished the month of April with a record of 11-11. They have an off day on Monday before the Chicago Cubs come to town. Bronson Arroyo takes on Jeff Samardzija at 7:10pm EDT. 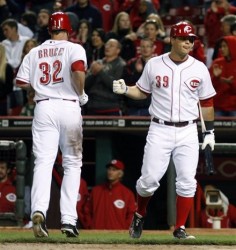 The Cincinnati Reds failed to sweep the Houston Astros in their 3-game series finale this afternoon. Despite the team scoring just 3 runs, this loss wasn’t really the offense’s fault.

No, the blame can easily be laid at the feet of “ace” starter Edinson Volquez, who was wild in his 4 inning start. Yes, I said 4 innings. In that wholly inadequate length of time for a start, Volquez walked 5 and allowed 3 runs.

The loss actually ended up being blamed on Mike Leake, though. For some bizarre reason, he was pitching in relief in the 9th inning of a tied ball game. You know, the role he’s been training for his whole professional life. A walk was his undoing, as well, as he walked J. R. Towles who later scored the winning run.

The Reds were losing early, but the offense did manage to make it close again. They scored one run in the 4th, and then tied it in the 7th thanks to back-to-back home runs from Chris Heisey and Drew Stubbs.

The Daily Brief: Winning is Easier When the Other Team Doesn’t Score

Last Game
The Cincinnati Reds rolled into Texas to face the Houston Astros, and the great starting pitching the Reds rediscovered in Chicago continued. Travis Wood almost made it through the 7th inning, but couldn’t get the final out and had to settle for 6 2/3 shutout innings. The strange lineup manager Dusty Baker put together–no Joey Votto and both catchers–came through and gave the Reds an easy 6-1 win.

Next Game
Homer Bailey will make his second start of the season for the Reds, and everyone would love for him to be as dominant as his first time out. The Reds will be facing Brett Myers of the Astros. The first pitch is scheduled for 8:05pm EDT, and it will be televised on FS-Ohio.

Rolen Close to a Return
Scott Rolen traveled to Houston to rejoin the team and participated in batting practice.

“He’s been doing a lot of treatment,” Baker said. “We’ll see day-to-day. It depends on how he looks. Some guys need it and some guys don’t . . . It depends on his stroke. It depends on the person. It depends intricacies of their swing. The more moving parts you have the tougher it is.”

Given the Reds’ caution in returning banged up players to the lineup so far this year, I tend to think Rolen will still be out for a while. But considering their record without him playing–it’s not good–I can’t see the team sending him to Louisville for a rehab assignment.

What to Say to Sound Smart at the Water Cooler
Thanks to their two home runs last night–one from Travis Wood–the Reds now have the most home runs in the National League with 41.

The strangest Reds line-up of the season blew into Houston today and took down the Astros to the tune of 6-1.

Leading off was Drew Stubbs, playing center field. Pretty normal so far. He went 2-for-5 with a run scored. He was followed by Edgar Renteria (SS) and Jay Bruce (RF) who both went 0-fer. Bruce batting third is a little odd, and we’re all missing Janish about now, but still not too weird as far as line-ups go.

Brandon Phillips was in his normal spot in the line-up and the field, and contributed two hits and a walk to the offense. And then you start thinking maybe you’re looking at the wrong team.

Fred Lewis in left field batted fifth, and Ramon Hernandez next–wait for it–playing first base. Chris Valaika at third base, and then Ryan Hanigan catching. Travis Wood took the mound and started off the scoring with a three-run homer in the third.

Let it not be said that Dusty Baker is afraid to mix things up.

Wood got the win, and Aneury Rodriguez took the loss for the Astros. There wasn’t a save to be had. Tomorrow the two go again, with Homer Bailey taking the mound. First pitch will be 8:05 p.m. ET.