We meant to record this one earlier, but the game just flew by, taking all of 2 hours and 30 minutes.

Still, there’s some time to hear a bit of us from Goodyear Ballpark as the Cincinnati Reds lost to the Los Angeles Angels of Anaheim County.

We were having such a good time today at HoHoKam Park watching the Cincinnati Reds play the Chicago Cubs–and eating Island Noodles–that we whipped out the audio recorder and grabbed our ramblings to share with the wide world at large.

There are also lots of pictures of the Reds 7-6 win, and those will be uploaded later. 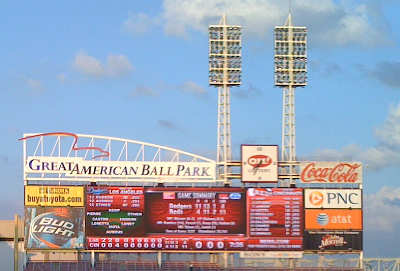 Saturday night the Crack Technical Staff and I, along with some other members of the Red Hot Family, headed out to a game at Great America Ball Park. We had every intention of drinking some beer, enjoying some baseball, and recording another episode of The Eighth Inning Show.

And then the rain came. Unprotected by roof, we were unwilling to sit in the rain or to stand in the concourse waiting through what turned out to be a 2-hour delay. Besides the pain in the neck it would be to entertain our 8-year old through that amount of time, there was also the fact that we were beat. It had been a long week.

The game took only 2 hours to resume, but our plans to record a podcast took all the way until today. Nevertheless, the CTS and I just recorded episode 111 in which we talk about our weekend trip to Cincinnati, my visit to Victory Field last night, the All-Star Game (plus my plan to get Votto voted in next year), whose on the DL, and Brandon Phillips nibbling on pretzels.