Griffey Not to Wear 30 for Reds

Instead, Griffey's 2006 jersey will bear the number three. Three is the number of children Griffey has, as well as the number all of his children wear on their own jerseys.

“My children are the most important thing in my life,” said Griffey. “I want to recognize them in any way that I can.”

Griffey had chosen the number 30 when he arrived in Cincinnati to honor his father, who had also worn that number with the Reds. “I had hoped to continue that tradition,” Griffey said. “I wanted to recognize three generations of Griffeys with one number. But Melissa says she's not up for 27 more.”

Teammate Adam Dunn was inspired by Griffey's gesture, and expressed an interest in also displaying his number of children on his chest.

Posted in Fake News Stories.
Comments Off on Griffey Not to Wear 30 for Reds

Yarrr! That’ll Take the Wind Out of Ye Sails! 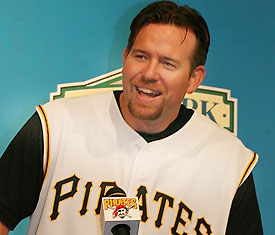 Marc (and surely about everyone else in the world by now) says:

DALLAS -- Officially, the Reds have acquired Tony Womack from the Yankees for minor leaguers Kevin Howard and Ben Himes. The Reds will also get $900,000 from New York, which will take out a good chunk of the $2 million due to Womack in 2006.

Readers of Red Hot Mama know that I have not been a baseball fan very long, and I don't make a secret of the fact that I don't know much. There are many things about this sport that I don't understand.

This signing is one of them.

Posted in Wheeling and Dealing.
Comments Off on Reds Acquire Tony Womack