One of my personal faves, Tom Shearn, took the mound for the Bats. Seven innings later, he'd given up just one run on five hits. A very nice outing. Wes Wilkerson finished the game out without allowing so much as a hit.

On the offensive side, the Bats came through with hit after hit. 13 when it was all said and done, resulting in eight runs. Names you might recognize bringing in runs for our Louisville friends: Aaron Herr, Mark Bellhorn, Jeff Bannon, and Chad Moeller. 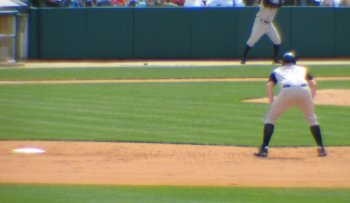 This was the first time that we bought the lawn seats and sat on the berm at Victory Field in Indianapolis, and I must say that I highly recommend it. You have to find a spot in extreme left field if you want to be able to see the big scoreboard, but if you're OK with just the score and the inning, where we were sitting just left of center is great. Not only do you have the option of lying in the sun to watch the game, but you get super-close views of the center and left fielders both diving for a ball deep in left center and both missing it. You can actually hear them grunting as they hit the ground.

Plus, if you stay on the grass you can bring in your own food. Since we're trying to be frugal while we're paying for two mortgages and daycare, we carried in a cooler filled with Capri Suns and Jon's Famous Lunch Meat and Barbecue Sauce sandwiches. Good luck getting those at the concession stand! 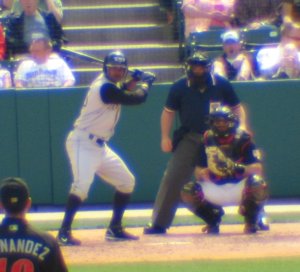 After the game, Knothole Club Members and kids who were there for the big Cub Scout outing were invited to run the bases. There must have been a few hundred kids who lined up to take part in that particular event. I bet the Victory Field grounds crew is going to have a good time cleaning that up. On the other hand, each of those kids weighs, like, 50 pounds, so maybe it doesn't make a difference.

Anyway, back to the game. The win brought the Bats' record to 14-15, tied for second in their division and three and a half games back on the Indians. Tomorrow they return home to face Ottawa.

May 6: Reds Try To Avoid Sweep

RHM is apparently at the game, so I'm pinch-blogging. Here are the starting lineups:

So far, the Reds are 0-2 this season when I've started the game thread, so today I'm hoping for them to snap not one, but two losing streaks.

Despite scoring seven runs, the Reds dropped their fourth game in a row yesterday to the Rockies by a score of 9-7.

Aaron Harang pretty much bit in his five plus innings of work, giving up five runs (earned) on eight hits. He did strike out eight, which is very nice, but I think we'd all be happier if he'd get his strikeouts before allowing his runs. Just something to consider.

Still, if Harang's had been the only problems with the pitching staff, the Reds would have walked away from this game with a W. Instead we're stuck singing a way-too familiar tune about the deficiencies of the bullpen.

Todd Coffey finished out the sixth and allowed a run (earned) on a hit. Victor Santos gave up three runs (earned) on four hits compared to only one out in the seventh. Brad Salmon fared better, going hitless but with two walks for the rest of the seventh plus the eighth, and Jon Coutlangus didn't let his runner score either in the ninth.

As for the scoring, Adam Dunn, Ryan Freel, Edwin Encarnación, and Scott Hatteberg provided the RBIs. EdE's came on a two-run homer in the sixth.

Young Josh Hamilton was the look-on-the-bright-side feature again this game, going 4-for-5 and scoring four the of Reds' seven runs. He got the would-be rally going in the eighth, stole a base, and had what I've read to be a superlative diving catch in center field.

Nevertheless, the game resulted in the Red's record dropping to 13-17 and the series going to the Rockies. They sit in fifth place, barely above the Cardinals and seven games back on the division-leading Brewers. They'll try to avoid the sweep today at 3:15 p.m. when Bronson Arroyo takes on the familiar Josh Fogg. Here's hoping Arroyo's got a complete game in him today.