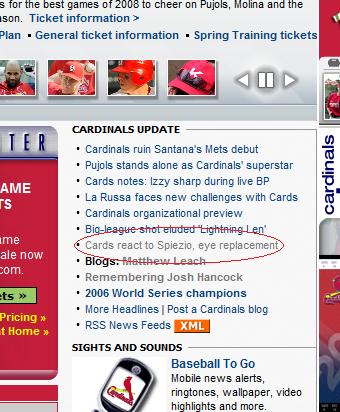 Pat, the mighty fine writer of the Pirates’ blog Where Have You Gone, Andy Van Slyke? and contributor to the Fanhouse at AOL brings us a video preview of “The Horrific NL Central.” Man, it’s great. I especially liked the parts about Dusty Baker.

Meanwhile, Back in the Central

While the Reds were busy giving Gary Majewski a very long rope, the other teams in the Central division were busy playing their own fake games. Only there games were even more fake than Cincinnati’s.

It looks like tomorrow brings a whole slew of Grapefruit and Cactus League action. I know more importance is placed in the games than they deserve, but it’s still awesome to be able to listen to baseball again. And during the Spring, there’s never a shortage of games to stream during the workday.

By “shines” I of course really mean to say “explodes like a super nova.” The ST opener was rather uneventful except for Majewski’s ominous entrance in the 5th inning. At that time the Phillies held a slim 1 run lead. His line shortly thereafter: 1/3 of an inning pitched, 9 batters faced, 6 earned runs, and 4 wild pitches. His spring training ERA is 162.00. Sure these things happen in early games, but this is Majewski we are talking about here. The guy that was given (for what seems like the umpteenth time) a blank slate by management and their paid lackeys in the written media.

“Majewskiâ€™s throwing the ball well. Heâ€™s in better shape than I heard he was last year. Heâ€™s stronger.â€

With most of the Reds’ front-office brass watching from behind the cage, including Baker, Majewski provided another encouraging sign. Many of his pitches stayed down and none of the hitters connected too solidly.

Unremarkable? Are you sure about that Mr. Sheldon? I have to disagree. Majewski was very remarkable not only in 2007 but in 2006 as well. Remarkably bad.

Or how about this charming tidbit from John Fay’s Insider last spring 3/9/07:

There is a very happy group of Girl Scouts running around Sarasota these days.
Reds relief pitcher Gary Majewski recently purchased $77 worth of assorted Girl Scout cookies â€“ enough to fill the bed of his pickup truck â€“ at the local Wal-Mart.

UPDATE: Majewski threw 20 pitches off one of the bullpen mounds on the back fields this morning. Word is the session went well.

Look, I hate to beat a dead horse here, but why do these writers insult our collective intelligence like this? We have seen this bum stink up the field now for 3 years. I realize this is just one game. But the man’s ERA is 162! That is how many games are played in a season. I suppose if they trot him out there enough times he might manage to trim it down to something less nauseating, somewhere in the vicinity of 27.00. Nontheless why go to the effort of giving this guy the benefit of the doubt by publishing such pure b.s. like this:

“I kind of figured out what I was doing wrong,” Majewski said of the video sessions. “It stinks it took this long to figure it out. It seems like it’s working now. I just need to keep working at it. A majority of my pitches are where I want them now — down in the zone instead of belt high where they were hitting them last year.”

Incidentally when that quote was originally published on reds.com Majewski used the word “sucks” not “stinks.” Like I said the writers really did their best to make the guy as appealing as possible. Too bad baseball isn’t politics. Maybe Gary can run for Congress or something.

Anyhow let us pray that Majewski’s days with this club are numbered. Fool me once, shame on me. Fool me twice shame on you. Fool me a third time and ummm… err, ah, we won’t get fooled again!

Peering into the Crystal Ball: ST 08

So the boys played 1 game, an intrasquad contest that pretty much equates to playing a game of sloshball with your buddies at your local elementary school yard on a weekend.

Hmmm, not sure if they allow that sort of thing in this day and age, but that’s what we used to do back in college in the early 90s. Put the keg on second base and everytime you round the bag you chug one. The game usually ends when players can’t find a nearby bathroom.

Based on the play by play account of today’s game I am prepared to go on record with some bold — very bold — fearless predictions. Here we go: