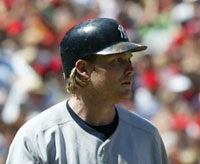 Last year, a lot of people here were hoping the Reds could get Craig Wilson. Well, this year, we got him. Though he may be playing in Louisville. He signed a minor league deal.

I wasn’t expecting this, I must say. Last I heard, it was the Mets who were going to sign him.

Wilson was traded to the Yankees in 2006, in part because he was about to become a free agent, and Pittsburgh expected him to get $5 or 6 million a year – more than the notoriously cheap Pirates wanted to pay.

But he never played well for the Yankees. In 2007, he signed with Atlanta for only 2 million – less than half of what many expected him to get. He was truly awful, and they released him in May. The White Sox then signed him to a minor league deal. He was awful for the Charlotte Knights, too…but it turns out there was a reason. He had chronic shoulder tendinitis. In June, he finally had his right shoulder roto-rootered. The surgery ended his season.

If he can bounce back to be anything like his former self, this is a bargain for the Reds. He could be the replacement for Jeff Conine: righty bat off the bench, half of a first base platoon, occasional corner outfielder. Wilson actually came up as a catcher, so he could be an emergency catcher, too. Maybe the Reds wouldn’t have to carry three catchers!