Yost to Lead Brewers to 2nd-half Failure through 2009 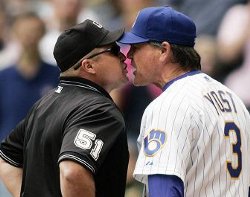 The Brewers announced this weekend that they have picked up the 2009 option for manager Ned Yost.

No doubt, the upper management was feeling empowered by Yost’s successful drive to second place this past season. It’s a bit easy to make fun of Yost, considering his losing record as a manager and how he failed to hold an 8 1/2 game lead over the Cubs. However, that might be a touch unfair. I mean, he was a catcher when he was a major league player, and those guys are always great managers.

Posted in Milwaukee Brewers, Wheeling and Dealing.
Comments Off on Yost to Lead Brewers to 2nd-half Failure through 2009