The final round of the tourney finally brings us to our guy in limbo, the illustrious Bubba Crosby. Crosby was with the Reds last season and so strong was his energy for the forces of good that his injury turned out to be season-ending…for the team. For the moment he’s without a team, but this hotness can’t stay unclaimed for long.

Oh, and there’s some other guy he’s up against.

Let the March to 100 Years Begin 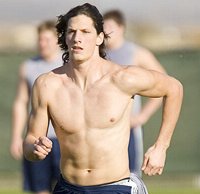 Even though they’re not yet on the major league roster, three minor league Cubs players have shown they have what it takes to be legitimate lovable losers.

Pitcher Jeff Samardzija, catcher Jake Fox, and outfielder Tyler Colvin were all victims of a burglary at the Cubs’ spring training home in Mesa, Arizona. The suspected criminal has been caught, but not before pilfering checkbooks, cell phones, credit cards, and more from the athletes.

What’s awesome, though, is what the burglar did with Samardzija’s credit card. He took it straight to a nearby Wal*Mart. Yes, Wal*Mart. I don’t know, but I think he should have set his sights higher. I mean, Samardzija does have a decent little contract with the Cubs.