Jon Heyman grades the offseasons of each of the Major League teams. How does our favorite division, the NLC, do? Not good.

The Cubs are the top of the division’s class at number 9 on Heyman’s list, due largely to the signing of Japanese import Kosuke Fukodome. I don’t know. I’ll believe that’s a good signing once I see him play.

The rest of the division was in the bottom third. The Brewers and Reds were numbers 20 and 21 respectively, with the Cardinals close behind at number 24.

The big news, I think is that the Pirates weren’t last in something. No, they were ranked 28th. The last place finish goes to the Houston Astros.

30. Astros. How does anyone get Tejada just hours before Mitchell takes the podium? Good grief. F

But you can’t argue with the demonstrated success of Fukudome 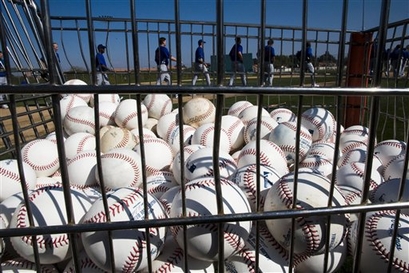 The Cubs gather up everything they’ve got left to acquire a fifth starting pitcher.
Posted in Chicago Cubs, NL Central, Pretend Captions, Spring Training.
Comments Off on But you can’t argue with the demonstrated success of Fukudome