Somewhere, Adam Dunn is Banging His Head Against a Wall

It does my heart good to hear Dusty Baker say stupid things. It helps me put my own problems into perspective.

Lest you think that “clogging up the base paths” nonsense that he sputtered while in Chicago stayed behind with the deep-dish pizza, Dusty’s been taking again:

“I’m big on driving in runs and scoring runs,” Baker said. “Guys in the middle should score about close to equal to what they drive in. On-base percentage, that’s fine and dandy. But a lot of times guys get so much into on-base percentage that they cease to swing. It’s becoming a little bit out of control.

“What you do is run the pitcher’s count up, that helps,” Baker said. “You put him in the stretch, that helps. But your job in the middle is to either score them or drive them in. The name of the game is scoring runs. Sometimes, you get so caught up in on-base percentage that you’re clogging up the bases.”

Thanks, RLN, for pointing out the link. 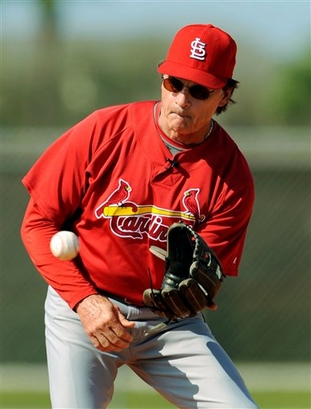 And you thought Dusty Baker overplayed the veterans.