Peering into the Crystal Ball: ST 08

So the boys played 1 game, an intrasquad contest that pretty much equates to playing a game of sloshball with your buddies at your local elementary school yard on a weekend.

Hmmm, not sure if they allow that sort of thing in this day and age, but that’s what we used to do back in college in the early 90s. Put the keg on second base and everytime you round the bag you chug one. The game usually ends when players can’t find a nearby bathroom.

Based on the play by play account of today’s game I am prepared to go on record with some bold — very bold — fearless predictions. Here we go:

Reds Start Off with a Kinda Win

The Reds were the first team to take to the field this year in a thrilling intrasquad game. 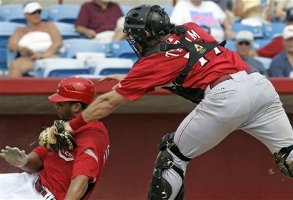 Wait, or is it intersquad? No, no, it’s definitely intra, just like the opposite of the highway system. Those go between states, you see, which means that when the Cubs play the White Sox, it’s intra. Or something like that.

Anyway, isn’t it great to see some baseball action? Or at least read about it hours afterwards, considering there was no radio or television of this non-event. The score of the game, in case you’re wondering how long I was going to bury the lead, was home-Reds 8, visiting-Reds 2.

Sadly, no quotes from manager Dusty Baker about “clogging the bases” or any other moronic things. Instead, he sounds like every other manager upon seeing young players for the first time.

And I like seeing Janish do well. My son got his autograph on a baseball last Spring, and it would be nice for Janish to still be around when we make it down to Florida next month.

Posted in Cincinnati Reds, Game Wrap, NL Central, Spring Training.
Comments Off on Reds Start Off with a Kinda Win