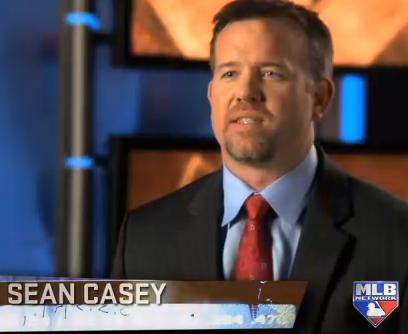 Or rather, started tonight at 6 p.m. I missed it, apparently from years of being conditioned to think that baseball doesn’t start until 7:10. It’s supposed to be on again at 7 tomorrow, though I don’t know if that’s a different episode or tonight’s episode again. I would imagine it’s tonight’s episode again, what with it being November and all.

There’s a link to a 44 second preview of the show in the press release below. Before you can enjoy those 44 seconds, though, you must sit through 30 seconds of a Microsoft commercial. Not that the commercial is bad, but I think that ratio of advertising to content is a little ridiculous.

Secaucus, NJ, November 10, 2009 – A new season of Hot Stove premieres on MLB Network with Greg Amsinger, Al Leiter, Dan Plesac and Billy Ripken on Wednesday, November 11 at 6:00 p.m. ET and Thursday, November 12 at 7:00 p.m. ET. As MLB Network’s live offseason studio show, Hot Stove features updates and analysis of the moves all 30 clubs are making and planning in preparation for the upcoming season. The show will also include the latest news on baseball’s end-of-year awards, including the Silver Slugger, MVP, Cy Young and Rookie of the Year awards. A preview of the new season can be viewed here.

Hot Stove will air on select weeknights throughout November and December live at 6:00 p.m. ET and re-air at 7:00 p.m. ET and 10:00 p.m. ET. During the MLB Winter Meetings from December 7-10, Hot Stove will telecast live from Indianapolis with analysis on offseason trades, free agent signings and player movement rumors.

MLB Network launched on January 1, 2009 as the largest debut in cable television history and is currently available in approximately 54 million cable and satellite homes. With live games, original programming, highlights, classic games, and coverage of baseball events, MLB Network is the ultimate television destination for baseball fans. For more information and to find MLB Network in your area, go to www.mlbnetwork.com.