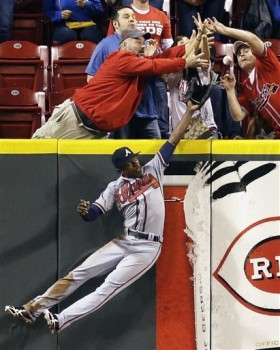 In brief: when Cueto returns, who leaves? 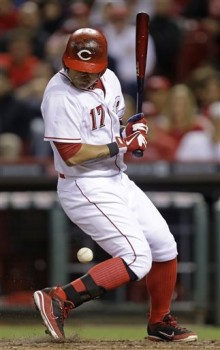 Can you believe the number of times this poor guy has been hit? He must a walking bruise by this point. (AP Photo/Al Behrman)

Last game
After sweeping the series with the Cubs, the Reds lost the series opener against the Braves last night, 7-4.

Bronson Arroyo had another rough start, giving up 4 runs (earned) on 8 hits and 2 walks through 5.0 innings. Alfredo Simon pitched 2 innings of hitless relief, but Logan Ondrusek gave the Braves their winning margin: 3 runs (earned) on 3 hits and 1 walk in the eighth. It was too late by the time J. J. Hoover closed it out without a hit.

Zack Cozart’s ears must have been burning, because he suddenly pulled out a 2-hole worthy performance, going 2-for-5 with 2 runs scored.

Hey, remember Johnny Cueto?
On May 13, Johnny Cueto left a game after experiencing pain in his right lat and oblique muscles. They put him on the 15-day DL a couple days later. He might have been back already, except he suffered a setback, causing all of Redsland to suddenly realize how lucky we were about injuries last season.

Good news yesterday: Cueto long tossed and threw 25 pitches in the bullpen and seems to be healthy again. Swiped from Mark Sheldon’s blog:

Cueto is scheduled to see Dr. Tim Kremchek later today and will probably have another bullpen session before thoughts of a rehab assignment resume.

The question is: when Cueto comes back, who leaves? Tony Cingrani, who’s been taking Cueto’s spot in the rotation, has outperformed 60% of the other starters while he’s been with the team. As far as ERA is concerned, he’s almost as good as Cueto himself was, and leads Bailey, Mike Leake, and Bronson Arroyo by 3/4 of a run or more and his WHIP is sub-1. Not bad for a rookie.

What to say to sound smart at the water cooler
The Reds have won all 5 home series they’ve played so far this season. 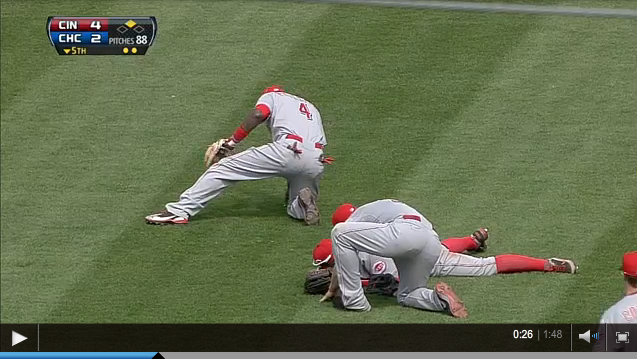 In brief: videos for the off day

Last game
The Reds couldn’t get a win for get-away day yesterday in St. Louis. The 2-4 loss pushes them back in to fourth place in the division, though they’re still closer to first (2.0 games back from the Cardinals) than they are to last (3.0 games ahead of the Cubs).

Homer Bailey was really great through 5.0 innings, allowing just one run (earned; a solo shot by Carlos Beltran) on 5 hits. Unfortunately for the Reds, he pitched 5.1 innings and ended up with 4 runs (earned) on 9 hits and a walk.

Except for Brandon Phillips, the offense wasn’t up to the challenge. Phillips had both Reds’ RBIs, including a solo shot in the ninth inning, but ultimately the team simply fell short.

Next game
The Reds have to day off, which is something they’re probably desperately in need of. It’s weird because you usually see a lot of off-days early in the season, but the Reds have been playing for the last 20 straight days. Tomorrow, they’ll go to Chicago and try to put some more distance between themselves (15-14) and the Cubs (11-16).

Hal McCoy profile on MLB Network
If you didn’t manage to tune in for the profile of Hal McCoy that was on MLB Network on Tuesday, or if you just want to see it again, you’ll want to check out this video. It’s a touching, heartwarming story, and perfect viewing for an off-day like today. It’s only about 7 minutes long.

Not quite enough? There’s also a couple minutes’ worth of interview with Sean Casey about his relationship with the Hall of Fame writer.

What to say to sound smart at the water cooler
Even though he has walked only twice in the last 10 games, Joey Votto still leads the league in bases on balls. The Mets’ Lucas Duda is a distant second, with 21 walks to Votto’s 27.

Posted in Daily Briefs.
Comments Off on In brief: videos for the off day 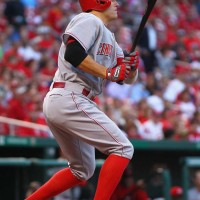