So now, former Reds infielder Rich Aurilia has another career lined up for after he retires from baseball. He can be a roadie, drive Raquel’s tour bus, and complain about radio stations not giving his wife’s songs enough playing time. 🙄

For those who just joined us, RHM has interviewed both Rich and Raquel Aurilia for her podcast, and I’ve called her a familiar face because that’s her lovely visage we’ve been looking all this time at on the left-hand column, about 2/3 of the way down the front page of this blog, linked to RHM’s review of the album.

Posted in Rich Aurilia.
Comments Off on References

Richard Santo Aurilia was born September 2, 1971 in Brooklyn, New York. He attended Xaverian High School in Brooklyn and in 1999, ten years after graduation, was inducted into the school’s Hall of Fame. He attended St. John’s University where he was an All-Big East selection in 1992. He was drafted by the Texas Rangers in he 24th round in 1992 and made his major league debut on September 6, 1995.

In 2000, the Our Lady of Grace League of Brooklyn retired Aurilia’s uniform number 22, and in 2002 he was the Giants’ recipient of the Roberto Clemente Award.

Rich is married to Raquel, a prolific model, actress, musician, and proponent for just causes all around. Raquel’s charitable efforts include:

The couple has two sons, Chaz Aiden (August 2001) and Gavin Shea (October 2003). Chaz is red-headed but has his daddy’s eyes, while Gavin favors his mother. I was lucky enough to find these things out first-hand when I chatted up Raquel at a spring training game before the 2006 season.

Posted in Rich Aurilia.
Comments Off on Non-Baseball Stuff 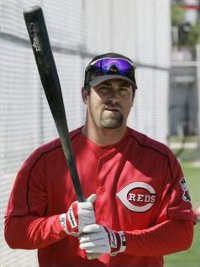 Rich Aurilia is the Reds’ utility infielder, veteran prescence, and about the only guy on the team who can hit with runners in scoring position.

He came on with the Reds in 2005 when he displaced Felipe Lopez at shortstop and earned the hatred of many Felipe zealots. When he was injured a month into the season, Felipe got his chance to prove himself at short, did so, and was soon the Reds’ All-Star representative at the position. To this day you cannot convince most of the zealots that the month of fighting for his position might have helped Lopez, though most of them have stopped actually growling about Aurilia now.

Finding himself without a position and possibly not yet acclimated to the midwestern ballplayer-should-be-seen-and-not-heard culture, Aurilia complained a little to the media about his lack of playing time. This got the zealots even more riled up, though, if pressed, most of them will agree that there’s nothing really wrong with wanting to play.

The Reds declined Aurilia’s option after the 2005 season and he became a free-agent. There wasn’t broad interest in his services, though, which is mad. Not that I’m saying he should have commanded $6 million or anything, but the Cardinals passed him over to pay Junior Spivey $1.2 million. And he’s now in AAA Memphis.

So when the Reds came offering $1.3 million with an option for 2007, Aurilia signed back on. He has come into the 2006 season with the understanding that he’s going to have to move around to get playing time, and he’s done that very well. He’s gotten a lot of his playing time at first base, where he lends more agility than you usually get from your first baseman. One of the benefits of having a former shortstop play there, I reckon.

In the line-up, Aurilia often bats clean-up, which has more to do with splitting up the Griffey/Dunn left-handed duo of power than with Aurilia’s particular clean-up hitting suitability. Nevertheless, he always gives a solid at-bat, definitely has the potential to offer power, and actually comes through in the clutch. When the game’s on the line in the late innings with men on, Aurilia’s among the guys you want to see at the plate.

To read all about the statistical analysis of Aurilia’s game, check out JinAZ’s Better Know a Red feature.

Posted in Rich Aurilia.
Comments Off on Baseball Stuff