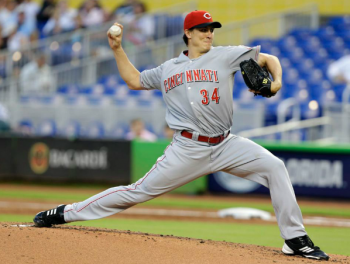 Last Game
After a day off, the Reds opened their series in Miami against the second-worst team in the Majors in a big way. Brandon Phillips started the scoring in the first by singling in Joey Votto. Then in the second, the team exploded for a five-run inning–two of which came from bases loaded walks–to give starter Homer Bailey far more run support than he needed.

Bailey was strong during his start, allowing two runs on just six hits, while walking out none and striking out 10. He notched the team’s first complete game of the season and captured just his second win.

Next game
The Reds hope to continue their five game road winning streak against the Marlins when Mike Leake starts. Miami counters with Alex Sanabia. The first pitch is scheduled for 7:10pm.

Heisey further away from return after setback
Chris Heisey, along with Johnny Cueto and Manny Parra, was on a rehab assignment in the Reds’ minor leagues. Unfortunately, he re-injured the right hamstring that he’s on the disabled list for.

“They said he re-strained it,” Reds manager Dusty Baker said. “That’s something you’re always apprehensive about when they’re coming back. You never really know, because one wrong move could send them back to zero. We hoped that he would be back by Philly, but it looks like now he won’t be.”

The 28-year-old was playing center field and batting second for the Blue Wahoos, but he never stepped in the batter’s box. Pensacola manager Delino DeShields pinch-hit for Heisey in the bottom of the first. The outfielder was originally scheduled to play seven innings.

This means we’ll continue to see more of Xavier Paul and Donald Lutz in left field. Considering how much better than Heisey both have been performing, that’s probably a good thing.