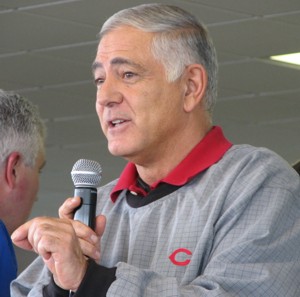 Fox Sports Ohio announced its television schedule for the 2014 Cincinnati Reds season. And there’s finally a bit of Reds news that made me smile: George Grande will be back to broadcast a few games!

Which games those are hasn’t been officially announced, but I’m looking forward to it. And if we’re lucky, we’ll get to see the Reds get to the smiling side of the scoreboard.

All told, Fox Sports Ohio will televise 145 Reds’ games. That combined with other national broadcast means that almost all of the Reds games will be available on television.

The full schedule is below.

Posted in Cincinnati Reds, NL Central.
Comments Off on Best news of the entire Reds’ offseason