Today the Reds went to a place they hadn't yet been during their road trip: the bottom of the ninth inning. From what I've been able to piece together from Web pages, newspaper columns, and my husband's second-hand account of having heard the game on the radio, it was a scrape-together of a win, but I'm sure I'm not the only Reds fan out there whose glad to have it.

I had to piece together game news because in this information age at my high-tech company, I cannot receive AM radio, I do not have access to a television, and streaming radio or video is forbidden just because it takes up the company's bandwidth. So unless I want to get my booty fired by taking a 3-hour lunch to sit in my car in the parking lot to listen to the game, I'm left with just the gamecast on mlb.com.

Actually, the gamecast is a wonderful invention. It gives solace to those of us stuck in Corporate America on beautiful spring afternoons. And I'm sure that if I found my enjoyment of the game in the statistics, it would be more than adequate, but for me, baseball is a human experience. I follow the sport to accompany the players vicariously through their streaks and slumps, homeruns and double plays, clutch hits and swinging strikeouts with the bases loaded, groin scratches and pats on the butt. 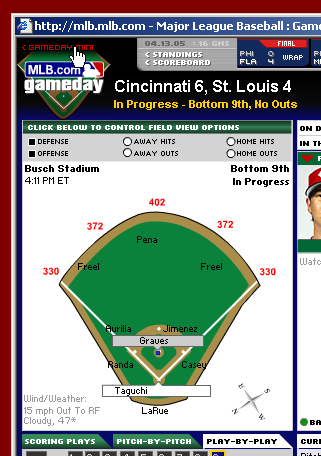 Though the gamecast leaves some some of the softer points of the game to the imagination, it also provides it's own sense of drama, like when something amazing happens. For example, I took this screenshot of today's game to record this unusual incidence. You'd think that if they were going to make a guy play two positions, at least they'd give him adjacent fields.

The gamecast also gives provides in-game excitement when it goes silent for long periods of time, leaving your brain to come up with all sorts of wild scenarios about what could be the holdup. I remember one day in June 2003 when the ESPN gamecast program just went silent. I reloaded the application, but nothing. I asked a coworker who was watching, but apparently the gamecast was just down. Suddenly, it popped back to life with the simple statement that Paul Wilson had been ejected from the game and no further explanation.

Later I would see Wilson charging the mound over and over again on highlights reels, but for the rest of the afternoon I had nothing better to do than ponder what had come to pass in those minutes of silence. And now, whenever there's a delay in the gamecast information, my mind runs wild with possibilities. Would I be going home to see a bench-clearing brawl? A streaker? A giant bird crapping on Jim Edmonds' head (I hope, I hope, I hope).

Yeah, the gamecast isn't the same as watching the game in person. Or on t.v. Or catching it on the radio. But I'll take the gamecast and my mental images of how Danny Graves is doing his damnedest to give away the game over actual work any day of the week.

Note to self: look into renting a giant bird that can crap on command for the next time St. Louis comes to town.