A phrase I never thought I’d hear: Weathers gets the win

10:30 p.m. and I'm writing this almost in my sleep. If I can't get used to these central time zone night games, there's no way I'll survive when they play on the west coast. No matter what time zone, any game that sees a total 20 runs and almost 30 hits is going to be long, but tonight's game had so much going on, it barely felt like more than 2 3/4 hours.

What did we see?
- The funniest thing I ever heard Chris Welch say as Carlos Zambrano let loose a pitch that passed Adam Dunn behind the calves. “I don't know whether I read this from the scatter report, but I think that's a hard pitch to hit: low and behind you.” Nicely done, Chris. I approve.
- The first ejection from a Reds game of the season as Zambrano walloped the very next batter, Austin Kearns. It did appear to be intentional, but I'm clueless as to why. I apparently have much to learn about the subtle nuances of the beanball.
- Ugly, ugly ball handling. Rich Aurilia and Joe Randa each had a fumble, and Dunn let one go past him. Fortunately for the Reds, the Cubs were also handling the ball like a greased pig.
- Ken Griffey, Jr. might possibly be over the hump. Just the very thought makes me and cousin Larry do the dance of joy! Hey! Hey! Hey! Hey! Hey! Hey! Hey! Hey! Hey! Hey!
- The offense finally woke up, just in time for the pitching to roll over. Ryan Wagner allowed a hit in the 8th; clearly he's struggling. Danny Graves rolled his ankle and ended up on the dirt; apparently he felt he hadn't provided enough drama from his two-pitch first out.

Aaron Harang versus Ryan Dempster tomorrow. We all know first-hand what Dumpster has to offer, but we also know how the Reds like to give it up to their own former pitchers. Either way, I might get some sleep tomorrow.

Posted in Game Wrap.
Comments Off on A phrase I never thought I’d hear: Weathers gets the win

I've got a question for all of you out there who have access to Fox Sports Net Ohio. After each televised game, they play the Gold Star Chili Reds Wrap. The intro to this segment is a montage of clips. The first clip is Sean Casey batting. The second is Jason LaRue tagging out a runner at home. The third clip is the one seen here: 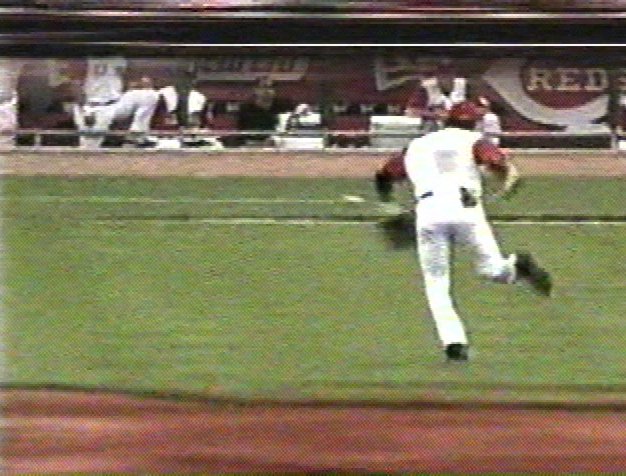 The quality is horrible because our VCRs are on the fritz, and I'm going to try to get a clearer shot tonight, but this at least will give you an idea of what to look for.

The third clip is a shot of the short stop throwing out a runner at first. It's a shot from the back, but I'm confident that it is Barry Larkin. Seems reasonable enough. The weird thing is, if you watch closely, even though the film goes by fast, you can tell that his number has been digitally removed.

So here's the question: why would FSNO remove Larkin's number? And secondly, don't you think they should put it back?