Perez and Gosling to Save the Day

Perez is a 28-year old outfielder who has played for the Mets and White Sox. He signed a minor-league contract with no invitation to spring training.

Gosling is a 25-year old LHP whom the Reds picked up off waivers from the Daimondbacks. The Reds DFA'd Luke Hudson to make room for Gosling on the 40-man roster, and rumor has it that Gosling will be in the thick of the competition for our highly contested fifth spot in the rotation.

Oh yeah! Can you tell how excited I am?? Woo-hoo!

Aw, you see right through me.

It's nothing against Perez and Gosling. These are perfectly adequate moves. It's just that my expectations are unrealistically high. After the way Castellini swooped in and changed the face of the team so abruptly, I guess I was hoping his man make similarly spectacular moves. Maybe land Clemens like Chad at RLN (and the Reds Choose-Your-Own-Adventure) suggests.

In the meantime, I'll work on getting genuinely excited. After all, the Power Pack went on sale today. 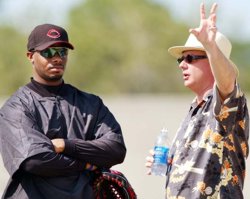 I didn't really read the entirety of this Q&A with Jim Bowden in floridatoday.com, but the first sentence makes it all worthwhile:

Wearing a windbreaker and offering a fist bump instead of a handshake, Washington Nationals general manager Jim Bowden looked anything but formal earlier this week at Space Coast Stadium in Viera.

A windbreaker and a fist bump. That's awesome. Does he also call everyone “G dawg”?

The second sentence ain't bad either:

Bowden, once the youngest GM in the history of Major League Baseball, doesn't always fit the image of buttoned-down executive.

C'mon, statheads! Where were all you guys calling for the youth movement when Bowden got the axe?