If you haven't had a chance to catch up with The Mayor about his outlook on life now that he's adjusted to the idea of being a Pirate (Yar!), then allow me to recommend this Q&A at post-gazette.com.

As fervently as Sean Casey was a Red, he's now a Pirate. I can imagine how it would seem disingenuous to the casual observer, what with the way he responded so negatively when he found out he was traded, but I think he's for real.

I'm not at all surprised that Casey would flip-flop emotions. If anything, I'm surprised that at the age of 31 he hasn't learned to keep his initial responses to himself until he has a chance to soak it all in. But I guess if he did that, he wouldn't be the person that he is. In fact, his willingness to lay it all on the line is one big way you know how sincere he is.

Guess I'm feeling a little nostalgic today, because I'm struck by how much I'm gonna miss this guy.

Last night I dreamt I was traded for Jeff Weaver.

Yes, I realize that's impossible in every way, and even my dream self knew something was amiss. In the dream, I was freaking out because, without knowing which team I was being traded to, I was afraid I wouldn't have enough time to redesign Red Hot Mama's color scheme before spring training.

Man, I can hardly wait for the season to start. Go Reds!

Posted in Random Ramblings.
Comments Off on A Bad Dream

According to a story on the official site, the Reds signed another old guy, Quinton McCracken, to a minor league contract yesterday.

McCracken, who will turn 36 years old next month, batted .237 in 134 games with Diamondbacks last season. A lifetime .276 hitter over his 11 seasons in the Major Leagues, he has also played for the Rockies, Devil Rays, Twins and Mariners.

Posted in Wheeling and Dealing.
Comments Off on Release the McCracken 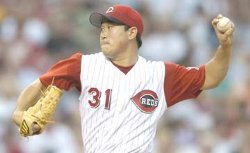 Bong and Bubba Nelson were the booty the Reds received from Atlanta in exchange for the beloved righty Chris Reitsma in March 2004. Nelson was also designated for assignment, cleared waivers, and was outrighted to Louisville on February 3 of this year. Bong is sure to clear waivers, too. There aren't a lot of teams gobbling up Reds cast-offs these days.

Well, the Nationals. And the Pirates. OK, maybe it's not a sure thing.

Now that Dunn is signed and the Hatteberg corresponding roster move has been announced, it's looking significantly less likely that general manager Wayne Krivsky had a secret trade for Dunn in the works all along. Darn it all. I was really looking forward to gloating that I'd called it.

Posted in Wheeling and Dealing.
7 Comments