Reds to Players: Lay Off the Twinkies 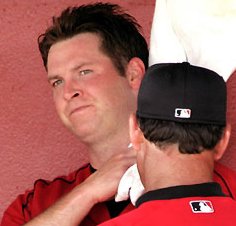 Yesterday, the Reds organization released right-handed pitcher Josh Hancock after his team physical revealed that he had reported for duty at 207 pounds, 17 pounds over the target weight the team had set for him at the end of last season.

Jerry Narron made a point to say that the weight rule isn't applied across the board for all players, but is rather a sliding scale that works in proportion to last year's performance. Hancock spent 133 games on the disabled list last season with a groin injury and a sore elbow. When he was briefly healthy in September, Hancock made 11 relief appearances, going 1-0 with a 1.93 ERA

Hancock should have known better. Narron says that he met with all of the players last season and told them that they'd better stay in shape. At least three of the players took this message to heart, with Austin Kearns, Todd Coffey, and Paul Wilson all appearing this year noticeably lighter than they were last year. Who knew Paul Wilson even had any weight to lose?

Part of the motivation for this move is about the weight itself. Carrying around those extra pounds adds a lot of stress and makes you more likely to be injured. Even a few pounds can make a difference. It is in the team's best interest to encourage its players to keep that weight off to save them the money, time, and talent lost to injuries.

There have been plenty of successful baseball players who have been chunky. But it wasn't the chub that made them successful, and they might well have been even better if they'd slimmed down. In any event, Hancock couldn't be qualified as successful at this point in his career, so the tale of Babe Ruth doesn't apply to him.

More than the weight, though, I think it's about the dedication. We're Americans: we know it's hard to lose weight. But it's not impossible, especially when the thing you're keeping in shape for is important to you. If a guy isn't willing to do whatever's got to be done—run 10 miles a day, eat only grapefruits, hire Richard Simmons for one-on-one consultation—then the team is justified in giving his chance to someone who is.

Hancock may well sign on with some other team and do great, maybe even without dropping a pound. But with an excess of mediocre relievers in the mix and the fact that the Reds don't even have to pay out his non-guaranteed minor league contract, Hancock was worth more to the team as an example right now than as a possible decent pitcher at some indeterminate time in the future. Not only does this move send a message that players need to demonstrate their dedication in an abstract way, but also that they need to listen to what their coaching staff is telling them specifically. Hancock was given a target weight number, he failed to meet it, and there were consequences. (It also gives Narron a chance to demonstrate that he's a no-nonsense, action-oriented kind of guy in this brief period before Lou Piniella tries to take his job.)

The only problem with Hancock as an example that I see is that his firing comes too late for other players to learn from it. If some position player has packed on the pounds in the off-season, it's probably too close to his own physical for him to take it off now. Still, he can get started, document his progress, and enjoy a lovely sense of dread when he rolls into camp.

So, all-in-all, good move. I approve.

Facts via ESPN. Self-righteous scolding all mine.

According to a story yesterday at SignOnSanDiego.com, the Reds are among the teams pursuing Pedro Astacio, who couldn't reach terms with the Padres by the deadline and is now unable to join them until May 1.

I assume that the Reds' interest is pending Astacio keeping his slender figure.