What a treat for the Reds: they're mentioned in the last sentence of the last bullet of the tacked-on “Notes” section of this story on SignOnSanDiego.com:

If pitcher Pedro Astacio is to return to the Padres via a Triple-A contract, it could mean turning down a major league contract from either the Reds or Nationals. Astacio is working out in the Dominican Republic, said his agent, Steven Schneider.

I'd like to be offended that anyone would consider an AAA contract over a major-league contract with the Reds, but actually, I kind of understand.

Posted in Wheeling and Dealing.
Comments Off on SignOnSanDiego Briefly Mentions the Reds Again

It has been really fun to type the same five of the same six shows in posts every day this week. I'm really not complaining. It's nice to see some Reds programming for a change.

Posted in Random Ramblings.
Comments Off on Reds Week Programming 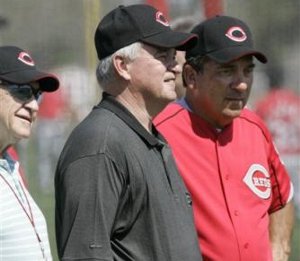 Reds CEO Bob Castellini consults the ghosts of Walter Matthau and the Where's-the-Beef? lady regarding a new baseball complex in Sarasota.

Posted in Pretend Captions.
Comments Off on Spring Training Photos: Field of Dreams

Again this year Joel has contributed a Reds survey to the online Reds community.

I hear I'm way behind in the Favorite Blogger category. For now I entreat you, dear reader, to go stuff the ballot box like crazy. We can turn to boycotts and indignant protests about how it's degrading to rank human beings later, if I don't catch up.

I'm holding my own in the Most Likely To Be The Alter Ego Of Dan O'Brien category, though I suspect that's mostly people wanting to accuse O'Brien of being a woman.

Posted in Random Ramblings.
Comments Off on Reds Survey