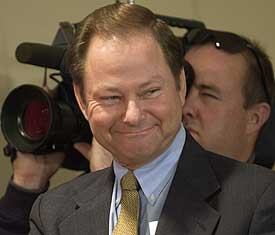 I went to the official site of the Milwaukee Brewers looking for some information about them signing my boy, Jason Romano. Instead, I was greeted with the smiling face of Dan O'Brien.

The article says that O'Brien is meeting with the front office for a few days, and it sounds like everything is a go for him to come on-board as a consultant. Brewers' general manager Doug Melvin specifically states that O'Brien will not be a threat to take the job of assistant manager Gord Ash. O'Brien was Melvin's assistant when Melvin was general manager for the Rangers.

Good to have buddies, I guess. Will O'Brien draw two paychecks this season? The Reds still have to pay him for 2006, you know.

The most intimidating quote of the story: “[O'Brien is] just a guy with a wealth of information.”

Yeah, he's got a wealth of information…about the Reds. If we're not careful, they're going to find out about our bad pitching.

Posted in Wheeling and Dealing.
Comments Off on O’Brien May Join Brewers

But Will It Improve His Ball Handling?

According to Hal McCoy in a story in the Dayton Daily News today, guest pitching instructor Tom Browning suggested that Eric Milton adjust his delivery toward the first-base side to get a better angle. When a right-hander is at the plate, Browning thinks the new rubber position will help Milton get inside and improve his performance.

No word yet on Browning's advice for increasing stamina or dealing with stiff competition.

Krivsky to Chat with Fans

Tomorrow from 11:30 a.m. to noon, general manager Wayne Krivsky will appear in a chat room on MLB.com to field questions from the inquisitive public. If you would like to get a chance to participate, get yourself an MLB.com account here.

I, of course, will be using my position, influence, and feminine wiles to sit in the waiting room with everyone else for the chance to ask a question. After my questions at the Reds caravan, I feel like I can't just ask any old question. I'm considering several approaches. I could use this opportunity to:

Of course, you and I both know I'll probably fall back on asking him about the mustache. Tune in tomorrow to see what I ask. Or whether my feminine wiles are even enough to get me past the waiting room.

Posted in Random Ramblings.
Comments Off on Krivsky to Chat with Fans

Could the Yankees Spare Us From Piniella?

I don't know Lou Piniella. To a relatively new fan like me, Piniella is a character of legend. Not necessarily baseball legend like Connie Mack, of course. More like a mythical legend. In my mind, Lou Piniella is the Sasquatch of baseball managers.

So when Reds' CEO Bob Castellini talks about bringing in Piniella as soon as possible, even to spring training this season, I'm not excited. I'm wary. I'm worried about a hairy creature stomping around Sarasota scaring off our remaining seven second basemen.

But according to Bill Madden in a story in the New York Daily News, Piniella probably will not be attending any baseball at all this spring. In fact, even in 2007 Castellini may have some competition in the pursuit of Piniella's services.

But despite having bonded again with Joe Torre, sources close to George Steinbrenner insist the Boss pines for “Sweet Lou” - his one big regret being that he fired him all those years ago. If Torre doesn't win it all this year, it wouldn't be at all surprising for Steinbrenner to pay him the $6 million he's owed for '08 and pay a like amount to Piniella just to keep him from signing on someplace else. Hey, it's only money.

Nothing will happen with Piniella this season. If he did accept a job in baseball, it sounds like Piniella would have to give a portion of his salary to Tampa Bay, which I can understand him not wanting to do. Plus, he could probably use a vacation. But after this season, what will Piniella do?

“I want to manage again,” Piniella said, “because I want to win at least one more world championship and another 250 or more games. But it's going to have to be with a team that's ready to win and an owner who's willing to spend what it takes to win, and if that's not the case then I'm content to call it a career.

Well, that could describe New York, but it might describe Cincinnati, too. We certainly could be in for a dose of big foot, especially if manager Jerry Narron can't pull off a miracle this season.