If Ms. Scratcher can weather the storm currently raging over St. Louis and make it on-line, we'll make fun of those Cubs-wannabes as they play those White-Sox-wannabes in tonight's first game of the season.

Hey, remember when the Reds used to play the first game of the season? Me neither.

The Reds beat the Indians in their final spring training game on Saturday by a score of 5-7 in Sarasota. 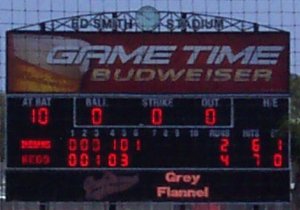 Eric Milton took the mound and had an impressive five innings of work. I was surprised when he had three strike outs in the top of the first. I was shocked when he added two more in the second. I was stunned when I realized I'd lost count of his strike outs by the time he left the game. It was nine, by the way. He gave up one run on three hits in his five innings. He also walked two and had a wild pitch.

Rick White took over in the top of the sixth and that's about the time I left the game. All of the starters, even Ryan Freel, had been taken out of the game, and even some of the replacements had been replaced. When I hadn't even heard of the majority of the Reds on the field, the family decided to get out of the sweltering heat and start the long haul home.

According to the official scorekeeper, the game temperature was only 83 degrees, but it felt like 93. The stadium was packed and people were getting irritated. When someone from the media box dropped a water bottle that landed on a fan below, I thought he was going to climb in there to have his revenge. 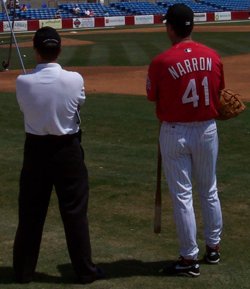 I was irritated myself. For the first time in two years' worth of spring training games, the guy inspecting bags wouldn't let us bring in drink boxes for my son. Don't get me wrong: we buy tons of concessions while at the park, but there just aren't many kid-friendly beverages and dehydration is an issue. Of course, my hubby just snuck them in in his pockets anyway, but it's the principle of the thing.

To make matters worse, I was within ten feet of Jerry Narron, trying to give him this damn craft I made for him, but he refused to turn around. What a jerk. Between his rudeness and his insistence on leading off with Tony Womack and batting Ryan Freel in the bottom of the order, I'm growing ever closer to a Fire Jerry Narron campaign.

But I digress. Long story short, the Reds back-up back-ups beat the Indians' back-up back-ups to make the spring training record 22-11. That's twice as many wins as losses. Tomorrow they open up the season against the Chicago Cubs at Great American Ballpark in Cincinnati.

Back Home Again in Indiana

Dammit, I'm new to this Daylight Saving Time. Whatever the heck time it is, I'm home. It was a little under 17 hours from Sarasota, and I'm out of sorts. If by, “out of sorts” you mean “travel-worn, nearly delerious with exhaustion, and majorly bummed that I have to go back to work tomorrow.”

You guys got me: the job I claimed to have been offered was a totally fake fabrication intended for your amusement. If the “Joe Kerr” bit didn't expose it as a lie, certainly the idea that ESPN would care to include a Reds' representative in any of their projects should.

I'm excited to hear that the Reds won yesterday. I stayed in the sweltering heat yesterday long enough to see Milton's nine strike outs and then left, figuring I'd better go before I woke up from the dream.

Speaking of dreams, I think I'll go try to catch a couple hours' sleep before tonight's smack talk with Bellyscratcher at 8. Or is it 7? Dammit.

Posted in Random Ramblings.
Comments Off on Back Home Again in Indiana