The Reds dropped a not-so-close one to the Cubs today at Great American Ball Park. The season opener saw the Reds score seven, which is good. But they also gave up 16, which is bad. Real bad.

Aaron Harang took the mound and worked five innings. He gave up nine runs (six earned) on nine hits. Chris Hammond added two more runs (all earned) on two more hits without getting a guy out. Mike Burns gave up another earned run on two hits. Matt Belisle and Todd Coffey managed to hold the Cubs scoreless through their respective innings of work, but Rick White gave up four runs (one earned) on three hits in the ninth.

But don't let the earned runs fool you. The crappy defense had just as much to do with the debacle as the pitching, if not more. Adam Dunn contributed one scored error and at least two more actual errors, Edwin Encarnación looked shaky, and it just seemed like no one was coming up with those tough plays. Or even the easy ones.

It's enough to make you ask Bob Castellini whether he's ready to sell his luxury box.

But it wasn't all bad. Dunn, the guy who could never hit a sac fly, hit one in his first at bat. Tony Womack, the guy who can't take a walk to save his life, took two. Scott Hatteberg, the first baseman who's blasted for his last of power, hit a three-run home run.

Too bad so much of the rest of the game felt just like last year.

The loss brings the Reds' record to 0-1. The Reds take tomorrow off to think about what they've done and try again with the Cubs on Wednesday at 12:35 p.m.

You just never know when a Cubby pitcher is going to get injured. As we go into the opening series of the 2006 season, you'll want to be able to immediately identify anything that can go wrong. Thankfully, the crack technical staff at Red Hot Mama has been hard at work creating a convenient refresher to help you get up to speed on all your upcoming Cub injuries. 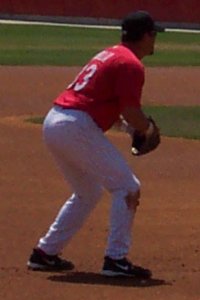 The answer to our last Name That Player photo was Rich Aurilia. Congratulations to everyone who guessed right.

Posted in For the Ladies.
Comments Off on Wrapping Up