Last week I was checking out a list on somebody's website of online chat rooms related to baseball teams, and there wasn't one for the Reds.

I thought that was bogus, so I created one. On the IRC network IRC-GLOBAL there is now a channel called #RedsNation. You can connect to the network using server irc.proxemic.net OR us.irc-global.org on ports 6661-6669, then of course just /join the channel #RedsNation. (It's not case sensitive, you can type /join #redsnation and you'll get there) 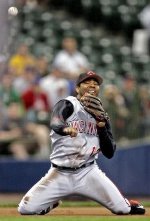 The Reds won today over the Brewers by the opposite of the ridiculous score they lost by yesterday to finish out the four-game series with three wins.

Aaron Harang, working on three-days rest to make an emergency early start after Eric Milton was scratched for knee problems, notched the first complete game by a Reds pitcher of the 2006 season. He allowed zero runs on five hits through nine innings. That's gotta help balance out that opening day debacle a bit.

The defense was strikingly on today, with Edwin Encarnación making at least three impressive defensive plays at third and Quinton McCracken a good catch or two in center field. Web-gem-worthy defense on a day when Ryan Freel isn't even in the line-up can only help the Reds' cause.

Eleven runs sounds pretty good for the offense, but they were helped by thirteen walks and three hits-by-pitch. In addition to the 11 runners who crossed the plate, 15 more were left on base. Only three of the Reds' runs came on home runs today, all from a two-out homer by Brandon Phillips. All-said-and-done, Phillips would contribute four runs, while Austin Kearns and Encarnación contributed three apiece.

The win brings the Reds' record to 12-7. Tomorrow they visit the Washington Nationals at 7:05 p.m. Elizardo Ramirez takes the mound for the Reds to face Livan Hernandez for the Nationals.

Eric Milton to Have Surgery

Early word this morning that Eric Milton will have arthroscopic surgery tomorrow to “debride the meniscus in his left knee,” according to the Reds. Doc Kremchek will do the deed, of course. The injury apparently was revealed in an MRI taken last night.

I'm no orthopedist, but based solely on the definition of “debridement” from dictionary.com, it sounds like what Milton is having done is similar to what LaRue had done. In LaRue's case, the cartiledge was torn and they trimmed off the tear so it wouldn't be flapping around and tearing more. In Milton's case, a piece of cartiledge has already torn off and is floating around.

If it is a similar procedure, then I expect the out time will be similar: two weeks more than the original estimate.

Marc goes on to guess that Darrell May will be called up to take his place. Darrell May is someone I have never heard of, so I checked the RLN Organizational Depth Chart and see that he's the first pitcher listed at Louisville who isn't on the 40-man. His ESPN player card isn't at all helpful explaining when he came to the Reds, as the last story about him implies he was sent to the Yankees. Thank you, ESPN.

What crappy timing. We need the Good Eric Milton all season if we are to have any hope for 2006. How amazing to think that I'd be upset that Milton couldn't pitch. Last year I was praying for something like this.

Silver-lining time: maybe May will turn out to be freakin' awesome. Or maybe the continued pitching woes will inspire our front office to make some pitching moves.

UPDATE: In fact, we'll be seeing Elizardo Ramirez starting tomorrow against the Nationals. He came up for a spot start last May against the Indians and it prompted me to post this, but I have higher hope this time around.

Posted in Wheeling and Dealing.
7 Comments