The Reds defeated the Nationals yesterday by a score of 4-2 to provide young Elizardo Ramirez, freshly called up from Triple A Louisville to fill in for the injured Eric Milton, with his first win.

Ramirez pitched seven plus innings, allowing two runs (earned) on six hits. Brian Shackelford allowed no hits through a third of an inning, but did hit a guy. Todd Coffey sprinted out to hold the Nats scoreless for two-thirds of an inning. David Weathers walked the first batter he faced in the bottom of the ninth, but also prevented any hits to close the game out and get the save.

A few of us commented on the game as it happened, so you can get the nitty gritty there.

The win brings the Reds' record to an astounding 13-7. Tonight Dave Williams takes the mound for the Reds against Billy Traber for the Nationals. Game starts at 7:05.

If you look down the right-hand side of the page, you'll see a section “Most Read Posts.” Number one is Posters for the Unmotivated, which has been viewed over 9000 times since it was published in September of last year.

Amazingly (to me), April has now surpassed last September as Red Hot Mama's biggest month ever by page views. And there are still five days to go.

I'd like to take all the credit, but I'm going to have to call it an indication of the uptick in fan interest in the team this year. The team is 13-7 and looking strong. This is the good life.

Let's keep it going. I want to see May leave 'em all in the dust.

Phillips: Your NL Player of the Week 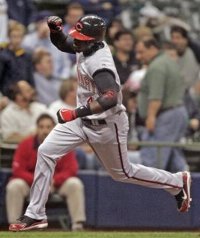 The Reds' most recently acquired second baseman, Brandon Phillips, has been honored by being named the National League Player of the Week.

Quite a wild ride for young Phillips, who was so recently being discarded by the Indians for some anonymous player or perhaps cash. May he continue to make Cleveland regret it.

Posted in Random Ramblings.
Comments Off on Phillips: Your NL Player of the Week