Two Brewers have been honored with baseball’s Nobel Prize: the Player’s Choice Award.

First, Prince Fielder is the most outstanding player in the National League: 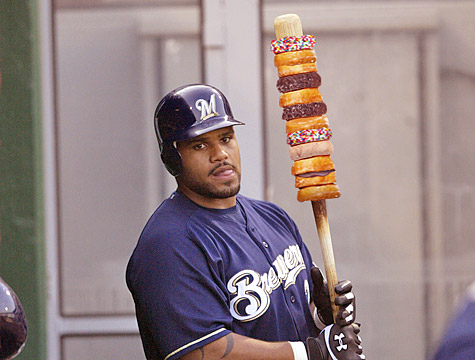 “That’s an awesome feeling, knowing that the guys you play against every day respect how you play and how you go out there and give 100 percent,” Fielder told Yahoo.com, which announced the results on a webcast.

And as if that weren’t enough, the players had the love for Ryan Braun as well, voting him the National League’s top rookie:

The 23-year-old did not debut until late May but nonetheless led big league rookies with 34 home runs, a .324 batting average and a .634 slugging percentage. On Thursday, he won the Players Choice Award for most outstanding rookie in the National League, decided by a vote of his peers.

“It really wasn’t easy,” Braun told Yahoo.com in a webcast announcing the award. “I came up, tried to make adjustments as quickly as possible, and as long as I was able to do that, I was able to find some success.”

Congratulations to the winners. Though these awards can’t make up for a missed postseason appearance, they do bring the rare opportunity to appear on a Yahoo.com webcast, so you’ve got to like that.

Posted in Milwaukee Brewers.
Comments Off on Brewers Still Winners Despite Month of September

Welcome Back, Interest in Baseball

Welcome readers, to the new and improved Red Hot Mama. You may have noticed that the past season has been kind of a downer around here, due in part to the fact that it’s been the same old mediocrity around Cincinnati but also due in fact to my perspective getting stale. I mean, honestly: there are only so many funny ways that a woman can say “please, for the love of all that is good, stop sending out Stanton.”

So we’re mixing it up around here. We’re taking the exclusive focus off of the Reds in favor of a broader picture of the whole National League Central. If we’re lucky, maybe one of these teams will win the division.

“But you don’t know anything about any of the teams in the NLC except the Reds,” you might say. To which I would respond, “what do you mean ‘except the Reds’?”

In case you were wondering what my Crack Technical Staff was up to while I was undergoing my team-identity existential quandary–and I know you were–he’s been working on a pretty massive change as well. Not only did he design the new look and feel for the site, but he also changed the entire underlying technology. Even as you read this, you have the ability to comment even if you’re not registered, plus edit those comments for up to 10 minutes after you post them.

Speaking registering for an account, if you were previously registered, your account has been migrated to the new software. Check your email for a message with your new password. If you have any problems, drop me a line and we’ll get it figured out.

And with that, I’ll get down to business. This is quite a thrill for me. I haven’t been this excited about baseball since Bronson Arroyo went to Cincy. And just look how well that worked out!