A Vaguely Baseball-Related Way to Waste Your Time Off Work

Thanks to redbird brain for getting me totally addicted to the penguin-hitting game. Like rbb, I topped out at 323.5, which makes me think that it's the highest score you can get. And yet, I can't stop clubbing these damn birds!

Posted in Random Ramblings.
Comments Off on A Vaguely Baseball-Related Way to Waste Your Time Off Work 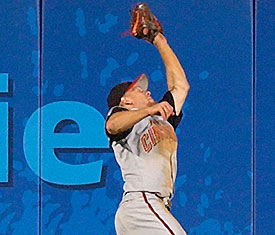 I'm psyched. LaRue is a good catcher, a hell of a guy, and just as hot as can be.

I caught a little bit of Andy Furman interviewing LaRue on WLW last night. He talked about being ready to step into the leadership role of the team, which will be a good thing. LaRue has a harder edge than Sean Casey could provide, but he still embodies the down-home goodness that has come to be a hallmark of the Reds culture. Maybe this nice guy won't lead the team to finish last for a change.

LaRue sounded more confident than I remember him being. I guess a good year will do that for you. And smarter, too, laying down some pretty sharp sarcasm a couple times. He's so good-looking that I think I assume he's not bright, and that's really not fair. I mean, if being attractive always made you vapid, then the Red Hot Mama's head would be as empty as the red level at Cinergy in August. Or, at least the yellow level.

LaRue got bonus points in my book for calling Furman “Seg” twice.

Back when I was doing the research for LaRue's Human League profile (which is in dire need of re-writing), I stumbled upon these entries at Outsports: The Home for Gay Sports Fans and Athletes. LaRue was very well-liked there, as evidenced by the fact that he was awarded the 2001 Brass Balls Award for Catchers and then named the Hot Red the next year. The same writer did both pieces, and I'd like to say that he has excellent taste, except he nominated David Eckstein for the Rookie Brass Balls award. Ew.

So, long-story-short: I'm pleased that we'll be enjoying the stylings of LaRue behind the plate for a while longer.

Posted in Wheeling and Dealing.
Comments Off on LaRue Agrees to Two More Years With Reds

Well, almost: there are still a few kinks to work out. Thanks to my crack technical team, Red Hot Mama is now enjoying a new host, hopefully one that won't schedule “announced” “brief” down time that takes my site down unexpectedly for three days.

I hope to be catching up on all the excitement this afternoon (Chris Hammond, woo!). I still don't have access to my e-mail ([email protected]-hot-mama.com), so if I haven't responded to your message, it's nothing personal. Probably.

“It hasn't really sunk in,” Freel said. Understandably so. Freel will turn 30 during spring training; seems a little late for the hyperkinetic to finally be coming into their own. But he'll probably still be crashing into outfield walls and battling Godzilla Toe when he's 55.

“He is arguably one of the best lead-off hitters on our team,” said general manager Dan O'Brien. I wish that guy could put a cap on his emotions sometimes. It's so embarrassing when he gushes.

I, of course, am quite pleased, and I can't wait till my blog comes back online so I can gush about it myself.

Posted in Wheeling and Dealing.
Comments Off on Freel Signs Two Year Deal