This Year in Baseball Awards

Remember those heady days of dedicating your life to All-Star Voting? Well, now you can recapture the excitement you felt giving yourself carpal tunnel to Vote Votto during the games, on your lunch break, and at Vote Votto slumber parties by voting in the MLB This Year in Baseball Awards.

And as an added bonus, MLB has weighed down the voting interface with a bunch of crappy Flash so it’s so onerous and annoying that I couldn’t even get through voting ONCE without grunting in exasperation and closing the browser window. Well, I guess that’s not exactly a bonus, per se. 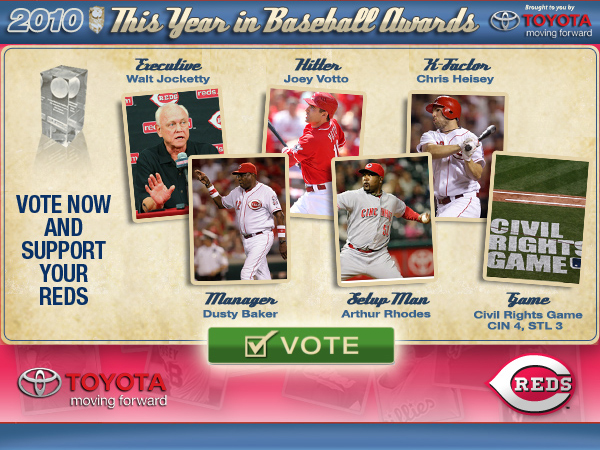 Posted in Random Ramblings.
Comments Off on This Year in Baseball Awards

The opening game of the 2010 World Series between the Texas Rangers and the San Francisco Giants is halfway over as I type this. The game is on, but I just haven’t cared as much as I have in the past years. And I think Redleg Nation has hit on the reason why/

After the Reds were eliminated from the playoffs this season, I found that I just couldn’t get excited about watching someone else’s team fight for a championship. My team should be playing these games!

Isn’t that the truth.

Sure, the Philadelphia Phillies made the Cincinnati Reds look silly in their 3 games in the National League Division Series. But it really wasn’t that hard to see the Reds making a run at things. A couple bounces for the Reds here, a complete lack of defensive implosion there, and things could have been different.

After the regular season of baseball is over, I’m always disappointed that there won’t be any more baseball until the next year. I’m always left wanting more. But this time, I wanted the more even more. The Reds were good this year. And they’re going to be good next year, with the legitimate possibility of being better.

How can I care if it’s the Giants or the Rangers that win their first World Series title ever when I’d rather it be the Reds?

Rate the Giveaways While You Wait for the WS

Checking out the emails from the Reds tonight to fill the hole left by a couple league series that wrapped up early, and thought this was on worth posting about. Personally, I was a fan of the scarf they gave out on Mother’s Day:

WE WANT YOUR FEEDBACK
Thank you for your support of the Cincinnati Reds throughout our 2010 National League Central Championship season! In an effort to ensure that we provide our fans with another great season on and off the field in 2011, we are asking for your help by providing input regarding our promotions and giveaways. We always want your trip to the ballpark to be special and provide you with a memorable experience.
Your feedback is always welcomed and appreciated. Please take a moment to share your thoughts as we work to put together our promotional calendar for 2011.

Posted in Random Ramblings.
Comments Off on Rate the Giveaways While You Wait for the WS

Is this an alternate universe? No, it’s the post-season.

I know, as a Reds fan I should root for the Phillies, but it’s just *so* satisfying to see Roy Oswalt go down. 😀

Posted in Random Ramblings.
Comments Off on Giants Win