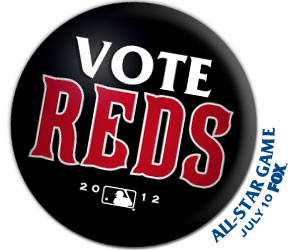 With two weeks remaining of All-Star voting, only he of the spectacular plays and active Twitter life, Brandon Phillips is leading the voting in his position. Now, while Phillips is all manner of spectacular, but this line-up ought to be loaded with deserving Reds starters. Consider Joey Votto; consider Jay Bruce; hell, consider Paul Janish. Credit where credit is due.

Of course, there is the part of me that wants Pujols to win to drive up his price for whatever sucker team signs him next season, especially since that will probably be the Cardinals.

But that’s consolation prize talk. There are still 2 weeks of voting to send our boys to the game properly. So get out there and vote! Your 25 ballots per email address do make a difference.

The MLB.com headline is “Reds reward MVP Votto with three-year deal.” Apparently the folks at MLB forgot that, though Votto sometimes plays like a seasoned veteran, due to the free agency rules, Votto was going to be in Cincinnati for the next three years regardless.

The only question left was how much he was going to make for those years, and that question has been answered:

There is surely more analysis to come, such as whether the Reds or Votto got a bargain (the Red Hot Household is split on the issue) and whether the length of the deal is adequate (everyone but Votto probably would have liked another year).