Red Hot Mama Has a Diary

My crack technical staff, who has been up to an awful lot of fiddling with the site lately, has made the biggest improvement in recent memory with the addition of the Red Hot Diaries. They're just like the diaries on the SportsBlogs Nation sites that all the kids are talking about these days.

You'll see them over there on the right-hand side: click Post Your Own to share your wit and wisdom with the Red Hot Mama reading public. C'mon. Do it. Don't leave me hanging here, man.

Posted in Random Ramblings.
Comments Off on Red Hot Mama Has a Diary

The great thing about an intra-squad game: half your team's gonna win. The not-so-great thing: it's kinda lame. But we did see some interesting things in today's victory of Ed “Nappy” Napolean's Reds over Bucky “F#&@*ing” Dent's Reds this afternoon.

The line-ups, thanks to Marc:

This game was a 4 1/2 inning long parade of Reds. After I cataloged the things I found interesting about this game in my mind, I discovered that they were the same things that Mark Sheldon of the official site found interesting, so I'm going to borrow liberally from his story and see if I can't get to bed early for a change.

Tomorrow the Reds again play the Tigers, this time the ones from Detroit, at 1:05 p.m. Ben Kozlowski will start in place of Eric Milton, who is out with a right calf-strain. Too much driving with his legs, I guess. Or perhaps the rubber position isn't quite right.

Which reminds me, I reserve the right to remove anything I think is offensive. I'm pretty hard to offend, though.

Spring Training Photos: I Only Have Ball for You 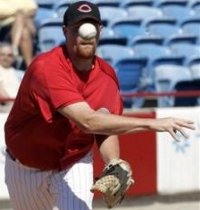 Posted in Pretend Captions.
Comments Off on Spring Training Photos: I Only Have Ball for You 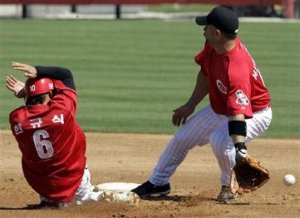 Kia Tigers shortstop Kyu-Sik Han, confident of being safe at second, shows off by singing “YMCA” as he slides into the base. Reds second baseman Frank Menechino shows off by staring at nothing in particular in left field instead of fielding the ball.